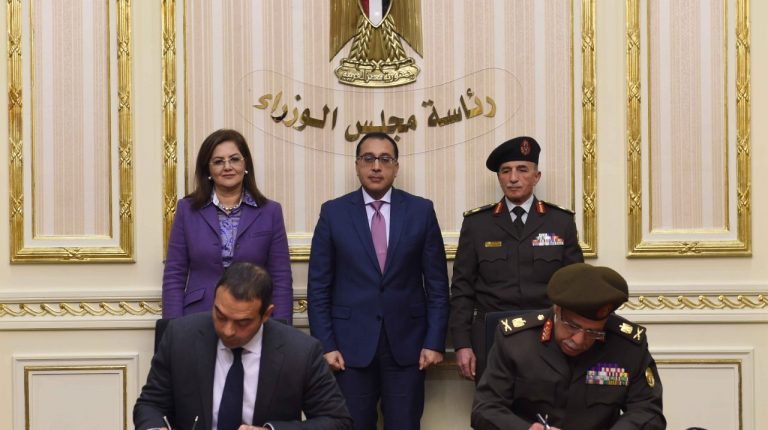 The Sovereign Wealth Fund of Egypt (TSFE) and the National Service Projects Organisation (NSPO) signed on Monday a cooperation agreement to help attract private business people to invest in their assets t and companies, in accordance with President Abdel Fatah El Sisi’s call to expand the ownership base of some assets owned by the organisation.

The agreement was signed by TSFE’s CEO, Ayman Soliman, and General Nader Zaki, Head of the Financial and Commercial Department at the NSPO. The signing was witnessed by Prime Minister Mostafa Madbouly, General Mohamed Amin, the President’s Advisor for Financial Affairs, Hala El Said, the Minister of Planning and Economic Development and Chairperson of TSFE, and General Mostafa Amin, the director of the NSPO.

The agreement will see the fund promoting and co-investing with private investors in assets and companies owned by the NSPO to increase private sector participation in the NSPO’s asset base, in line with the fund’s mandate as a catalyst to public-private partnerships and foreign direct investment. The process will target expanding the ownership base of the agreed companies, under the President’s initiative to help boost economic growth and create more jobs for Egypt’s youth.

“This agreement supports the economic reforms implemented by the government to increase returns on Egypt’s resources. We are applauding the NSPO’s supportive role in the economy in extraordinary times”, said El Said adding that the time is right to open to the private sector in order to increase growth and employment.

Soliman affirmed that this agreement reflects the fund’s role in building partnerships with the private sector and in acting as a catalyst to attract investments to important sectors of the economy while creating unique investment opportunities in new fields, previously unavailable to the private sector.

Soliman added that the fund will manage the preparation of investment opportunities, in cooperation with advisors, to determine the best utilisation of the agreed on investable assets. this will include the possibility of the fund co-investing with private investors in these opportunities in order to own up to a 100% of the companies and to support the NSPO in creating direct  partnerships to better utilise the assets and increase their returns.