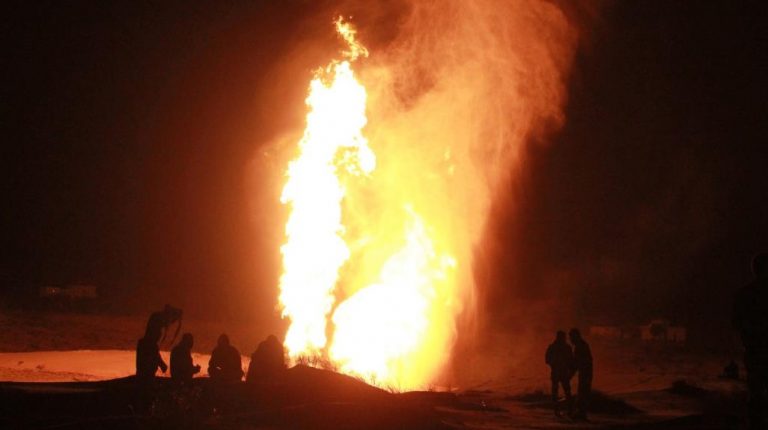 Militants have blown up the gas pipeline stretching between Egypt and Israel in the Bir Al-Abd region (80 kilometres west of Al-Arish) in North Sinai on Sunday night, according to Egyptian security officials’ statements.

The Associated Press quoted Egyptian security officials as saying that the pipeline was blown up by at least six masked militants who planted explosives under the pipeline in the town of Bir al-Abd. Flows of gas between Egypt and Israel were not affected since it was a local pipeline that was attacked, which transfers gas to Al-Arish and a cement factory in central Sinai.

No group immediately claimed responsibility for the incident.

The Egyptian authorities temporarily stopped the flow of gas through the pipeline in order to extinguish the fire which was massive, causing smoke to cover the sky.

“The EMG pipeline stretching between Egypt and Israel wasn’t harmed, nor the pipelines coming from Leviathan -Israel’s largest offshore natural gas field. The flow of gas from Leviathan is proceeding as normal,” said the partners in Leviathan – Israel’s Delek Drilling and Ratio, and the US-based Noble Energy following Sunday’s incident.

This is the third attack since Egyptian company Dolphinus Holdings contracted with Israel’s Leviathan and Tamar fields to buy 85 bn cubic metres, worth an estimated $19.5bn for the next 15 years.

Egyptian security official told Reuters that security forces started an operation in search of the attackers.

Since February 2018, Egypt’s security forces launched an extensive military operation in Sinai, aiming at targeting dens and ammunition storages that are used by armed groups. The operation includes navy, air , and infantry forces.