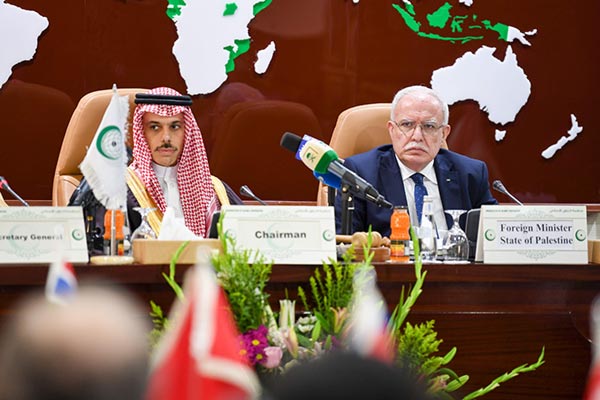 Secretary-General of the Organisation of Islamic Cooperation (OIC) Yusuf Bin Ahmed Al Uthaymeen said on Monday the organisation supports the establishment of independent state of Palestinian, with east Jerusalem as its capital.

The OIC is committed to finding a solution to the Palestinian case based on international settlements, and the Arab Peace Initiative, asserted Al Uthaymeen during an emergency meeting of the OIC.

Requested by the Palestinian leadership, the OIC organised a meeting for the 57-member body in Saudi Arabia’s Jeddah, to discuss US President Donald Trump’s Middle East peace plan.

Maliki said that Trump’s controversial peace plan would eliminate any chance for peace, ending the Palestinians’ aspiration to establish an independent and sovereign state, describing the plan as “unilateral, unacceptable and biased towards the Israeli side.”

The American plan recognises Jerusalem as the capital of Israel and allows it to annex the West Bank settlements, in a move that was considered by the Palestinian side as a violation of international law.

Maliki also explained that the plan would force the Palestinian people to recognise Israel as a Jewish state, and give it control over the capabilities, security, and borders of the Palestinian state, which will pave the way for the policy of illegal annexation of Palestinian lands to continue, and cancels any commitment to international law.

On the other hand, Iran accused on Monday Saudi Arabia of blocking its officials from attending the OIC meeting.

Abbas Mousavi, spokesperson for Iran’s foreign ministry was quoted by the Iranian Fars news agency as saying, “the government of Saudi Arabia has prevented the participation of the Iranian delegation in the meeting to examine the ‘deal of the century’ plan at the headquarters of the Organisation of Islamic Cooperation.”