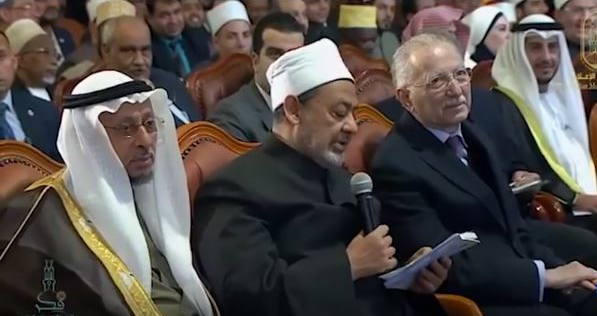 The recent divisions between Egypt’s Al-Azhar Grand Imam Ahmed Al-Tayeb and President of Cairo University Mohamed Al-Khosht last week in verbal debates over Islamic heritage brought the divisions between religious and secular parties to the front pages of Egyptian media.

The debate alerted the public that the two sides have failed to reach a consensus regarding the renewal process in Egypt.

Prominent journalist Emad Al-Din Adeeb commented in an op-ed from the privately-owned Al-Watan newspaper on the debate between Al-Tayeb and Al-Khost, saying that “instead of seeing what happened as an intellectual struggle or division within society, we should be happy with such controversy and encourage and develop it, because it is a dialogue between distinguished scholars that combine jealousy with religion and mastery of human knowledge.”

As for the renewal process, he suggested that this matter is an issue that deserves much reflection and analysis, believing that it is all about diligence, and the protection of people from extremism.

Mohga Ghalib, member of the Social Solidarity Committee in Parliament denied the need for legislation regarding the renewal of religious discourse.

Ghalib, who is also former dean of the Faculty of Islamic Studies at Al-Azhar University, said renewal of religious discourse needs to focus on important issues that occupy public opinion and are closely related to citizens. She also stressed the need to work for more coordination on efforts between the concerned authorities to renew the religious discourse.

Commenting on the recent conference, Ghalib emphasised that these conferences are of great importance in renewing religious discourse, especially in what is presented by important research and working papers that have a great impact in resolving crises.

Political Islam researcher Tawfek Hamid said, “Al-Azhar failed, over the years, in the renewal of religious thought and discourse, because it seems that the entity is still studying the jurisprudence of the four schools, the same jurisprudence that was taught hundreds of years ago already.”

Hamid, who is also a writer, said, “It is difficult to imagine how an institution that was based on indoctrination, memorisation, and reflection, only within the limits of certain doctrines – could carry out the task of renewing Islamic thought that had not been renewed for hundreds of years since the door to ’diligence’ on the origins of religion was locked.”

Osama Al-Abd, head of the Religious Affairs and Endowments Committee of Parliament, said that Al-Azhar expresses the moderation and tolerance of Islam, the highest institution can carry out the mission of renewing religious discourse and confronting extremist ideology, because the institution has the backing of hundreds of thousands supporters and alumnae supporting its mission.

He said that Al-Azhar can do this task with the participation of all institutions in the state of education, youth, and other entities, pointing out that the Religious Affairs Committee is a partner of Al-Azhar in combating extremism.

Al-Abd also added that the Al-Azhar International Conference for the Renewal of Islamic thought came just in time since Muslim nations needs to fight extremism and terrorism of all kinds.

The Monday and Tuesday conference focuses on how to renew religious discourse, refuting misconceptions about Islam, discussing women and family issues, as well as the roles of religious, academic, and international institutions in this regard.

During the conference, President Abdel Fattah Al-Sisi called on religious institutions, especially Al-Azhar, to pay special attention to renewing religious discourse, stressing that failing to do so would leave the door open for youth to be influenced by wrong interpretations of the Quran and Sunnah. He also said that he wishes to see Al-Azhar’s international conference as the start of an annual chain conference aimed at developing Islamic thought.

Over the years, several religious clerics stressed the necessity of finding solutions to get rid of all extremist ideas and misconceptions surrounding religion, demanding a specific map for major issues to be discussed, and representing all different sectors of society.

Division continues between intellectuals and religious scholars over finding a certain process regarding the application of the renewal of religious discourse.

It seems that Egypt’s Al-Azhar, the highest seat of Sunni Islamic learning, intellectuals, and other religious institutions, have failed to reach a consensus regarding the renewal after long debates that continued six years until now, which draws an unclear path for this matter’s future.

Since 2014, several conferences, seminars, and meetings in Egypt and abroad, and media interviews have been held about the necessity of this renewal, but every time it either ends with official recommendation or more debates rising controversy in the public.

On the sidelines of these activities, the state has ordered building new mosques, restoration of dilapidated ones, and unifying Friday sermons to control any extreme messages.

In one of the recent verbal debates on the issues, Al-Tayeb and Al-Khosht asked whether the renewal should be built on principles inherited from predecessors or start from the ground up to face modern challenges, during an international conference on religious renewal.

Last week, Al-Azhar organised a conference in Cairo to discuss urgent issues on the religious stage and religious renewal. Delegates and scholars from 46 countries were invited to the Al-Azhar International Conference on Renovation of Islamic Thought.

Al-Khosht called for not considering Islamic heritage while drafting the new discourse, and forming a new kind of religious thought, explaining that it is impossible to renew current religious discourse since antiquated concepts of Islam only suits traditional lifestyles.

Religious heritage should be renewed in consideration for the modern world, Al-Khost said, adding that this does not mean “restoration of an old building with new concepts,” but the establishment of a new building with modern concepts to reach a new religious era.

His viewpoint was not welcomed by Al-Tayeb, who immediately denounced it.

Tayeb said the new discourse should align with Islamic heritage, saying that, “The heritage, which some people take lightly today, built a nation, taught people co-existence, allowed Muslims to reach Andalusia and China,” adding that “the current sedition is political, not heritage.” He also criticised those who blame Islamic heritage for making Muslims weak.

Public opinion varied regarding both stances, as some people praised Al-Tayeb for his view, which they believe reflects the stance of all inside Al-Azhar and in other religious institutions.

This is not the first time for a public debate of top institutions to be unable to agree on a unified vision for reform. In 2018, Minister of Religious Endowment Mokhtar Gomaa, and Grand Imam Ahmed Al-Tayeb, previously had their own division on the renewal, as Al-Tayeb demanded consideration of all the sayings of the prophet in the renewal, while Gomaa said that some of the eras cannot be followed in the current stage due to world developments and changes and urged that renewal of religious discourse should consider the requirements of modern times.

“Al-Tayeb has not yet reached the stage of taking bold decisions, due to its affiliation with the “Ash’ari school of thought. He did not take any radical position like his predecessor Imam Muhammad Abdo. The task of renewing religious discourse is the task of Al-Azhar, but that, in itself, is a fatal mistake,” Asfour said in press statements.

Asfor also said that the “renewel of Islamic thought is the issue of the future of a nation, and we have to follow the path of Imam Muhammad Abdo. This renewal is important for all Muslims.”

He denounced making Al-Azhar the only entity tasked with renewing religious discourse. Al-Azhar, he said, “is no religious priesthood in Islam, Al-Tayeb is not a mediator between people and God”.

“The intellectual relies on his mind and makes it a priority for understanding religion. This is not a deviation from religion and there are some Islamic schools that do this, such as Mu’tazila and Rashdaya,” Asfour concluded.

Meanwhile, Islamic Research Academy Secretary General Ayyad said that Al-Azhar provides a speech that matches the requirements of the times and adheres to the principles of Sharia.

Ayyad commented on calls that rejected the renewal in general, mentioning that there are some who say that renewal is departure from the principles of religion and heritage, and there are others who see that renewal as a means to return to the age of the Prophet Muhammad’s companions and followers. Both are wrong, he said, explaining that scholars have already exerted effort in this matter, and this is what happened by Imam Al-Shafi’i. When he moved from Iraq to Egypt, he renewed his doctrine, and set a new one that fit Egypt.

The renewal of religious discourse means offering the discourse according to the requirements of the era and its conditions, provided that it combines the requirements of Sharia with its constants and fits with reality, he said, stressing that Al-Azhar does not involves itself in polemics.