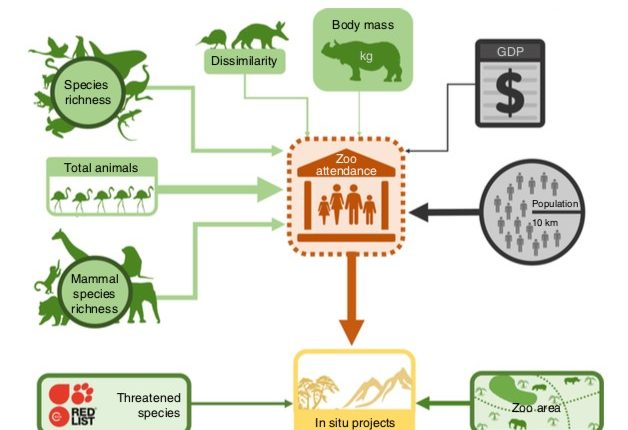 As the sixth mass extinction sends shock waves through whole segments of species, modern zoos and aquariums stand as leading sources of conservation funding and safe havens for populations deemed threatened in the wild.

Collectively, members of the World Association of Zoos and Aquariums attract 10% of the planet’s population and contributes more than $350m annually to conservation programmes in the wild, making them the world’s third largest funder after World Wildlife Fund and The Nature Conservancy.

But how do zoos and aquariums address the growing need for funding programmes as more populations face threats due to climate change, disease, human encroachment, and disease?

The answer begins with you, the visitor, according to research published recently in the international journal Nature Communications. Zoos and aquariums that see more visitors also contribute more funding to conservation activities on site and in the wild. Which leaves zoo and aquarium directors asking the same question that these researchers asked: What compels people to come? Is it the large, iconic species of mammals? Or is it more?

The study, entitled “A system wide approach to managing zoo collections for visitor attendance and conservation in the wild,” conducted by researchers at Trinity College Dublin, the National University of Ireland, Galway, University of Southern Denmark, and the global non-profit Species360, finds that, yes, attendance is higher at zoos where large, iconic animals like rhinos, tigers, and bears reside.

“Our findings show that charismatic animals in the care of accredited zoos and the visitors that come to see them, are helping to make a difference by driving much needed conservation actions,” says Dalia Conde co-author and species conservation specialist at the University of Southern Denmark. She is also the Director of Science at Species360.

However, according to Conde, zoos and aquariums hold “

16% of the planet’s threatened species. With an unmatched knowledge on animal biology, medicine, welfare, and high number of visitors, they are uniquely positioned to help avert one of humanities major crises.”

She expresses the enormous power of these communities, saying:

“In contrast with the past five mass extinctions in the Earth’s history, the current extinction crisis is human driven. This is good news because it means we are in a position to solve it! And zoos and aquariums still have much room to reach their full conservation potential.”

Dr Kevin Healy, co-author of the study and lecturer at the National University of Ireland, Galway, adds:

“While having big charismatic animals is one way to gather an audience, having a more unusual collection of species is an alternative way to drive gate receipts and with them conservations fund.”

An example could be a collection of many different butterfly species or threatened amphibians.

This was found by modelling the relationships between attendance, animals, conservation, and other factors for 450 zoological institutions worldwide.

Several factors, including size and variety of species, influence attendance and conservation funding at zoos and aquariums, according to the study published in Natural Communications.

The study provides “global evidence to suggest that zoos don’t need to compromise their economic viability and entertainment value in order to have a significant value to conservation,” says Yvonne Buckley, co-author of the study and professor of Zoology at Trinity College Dublin.

Central to the study’s findings is the Species360 Zoological Information Management System (ZIMS), which has grown to one of the largest sets of wildlife data worldwide. Over 1,200 zoos and aquariums in 99 countries use ZIMS to curate and share information on thousands of animals in their care. ZIMS data analysis, in turn, is a key source for scientists working with organisms such as IUCN Species Survival Commission, the Convention on International Trade in Endangered Species – CITES, and the Wildlife Trade Monitoring Network – TRAFFIC, to sustain populations, improve animal welfare, fight illegal trade, and more.

The US Association of Zoos and Aquariums conduct 115 different reintroduction programmes, more than 40 of which are designed to bolster populations of species listed as threatened or endangered under the Endangered Species Act.

Who cares about Animal Rights?

Your zoo is a prison