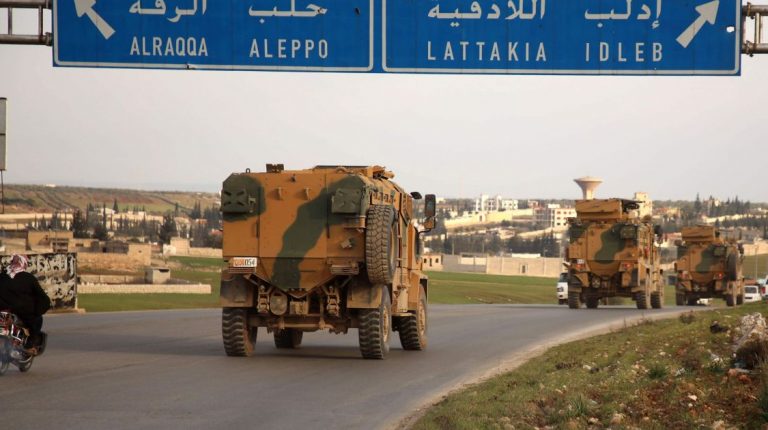 Turkish Minister of Foreign Affairs Mevlut Cavusoglu said on Tuesday that Ankara and Russia are taking steps to ease tensions in the Syrian province of Idlib, amid the Syrian shelling on Turkish troops, killing eight soldiers.

“We seek to put an end to these conflicts together with Russia, like we did within the Astana and Sochi processes. We cannot put up with attacks on our forces, so we took retaliatory measures in Idlib and we will continue to act this way,” he explained.

On Monday, Turkey launched air strikes against Syrian government targets, killing 76 Syrian servicemen, after the Syrian shelling against Turkish troops. However, Russia blamed the Syrian shelling on Turkey as it failed to notify Russia about the movements of its troops.

The Turkish strikes, which eliminated 76 Syrian government soldiers, comes in a response for the shelling of the Turkish troops in Syria’s Idlib governorate on Monday. About eight Turkish soldiers were killed in the shelling.

Akar was also quoted saying that Turkey’s armed forces had taken “all forms of measures” in Idlib, clarifying that Ankara had informed Moscow, which backs the Syrian government, about the Turkish Troop’s moves in Idlib.

Although Turkey had claimed that fighter jets were involved in Turkey’s strikes in Idlib, the Russian defence ministry said that the Turkish planes had not violated Syria’s border and no air strikes on Syrian troops had been recorded.

The Russian Centre for Reconciliation in Syria  denied earlier that Turkey had informed Moscow about its moves in Idlib, as the centre said Turkish military personnel had come under attack by Syrian troops in Idlib, because Turkey had failed to notify Russia about the movements of its troops in advance.

On Monday, Ankara said that the Syrian shelling had killed eight of its soldiers in Idlib, the move which was explained later by the Russian centre as the Syrian troops were trying to fire against terrorists retreating to Saraqib, blaming Turkey for failing to notify Russia about the movements of its troops.

As the Syrian government was making a large advance in Idlib, Turkey warned that it may launch a military operation there unless the fighting is halted.

Turkey’s President Recap Tayyip Erdogan was quoted as saying “We are determined to continue our operations for the security of our country, people, and our brothers in Idlib. Those who question our determination will soon understand they made a mistake.”