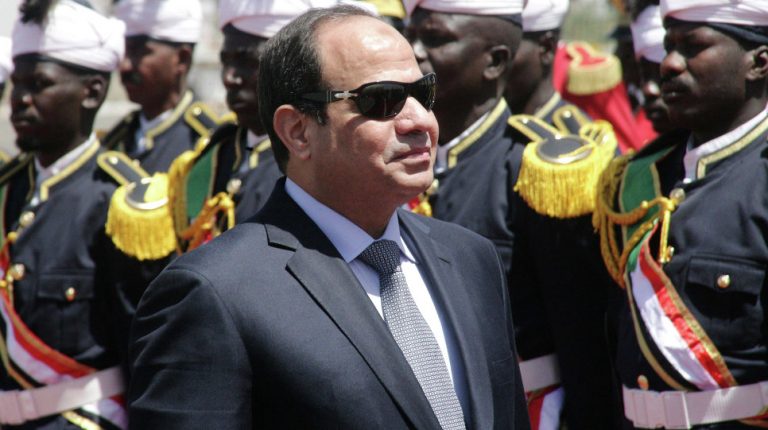 President Abdel Fattah Al-Sisi arrived on Saturday in Addis Ababa to participate in the 33rd African Union (AU) Summit, where he will hand over the AU chairpersonship to South Africa.

Presidential spokesperson Bassam Rady said that the president will participate in the AU Peace & Security Summit on Libya, and will also participate in a meeting over the Western Sahara.

Al-Sisi will also hold, on the sidelines of the AU Summit, bilateral talks with a number of African leaders and presidents.

On Friday, Egypt’s Minister of Foreign Minister Sameh Shoukry held a meeting with his South African counterpart Naledi Pandor in which they discussed the importance of continued coordination between the two sides in various topics concerning the African Union, which is a top priority for the AU’s reform and for the Peace Fund’s consultation.

The Peace Fund was established under Article 21 of the protocol establishing the Peace and Security Council of the AU to finance the AU’s peace and security operations.

Shoukry said Egypt’s ready to provide all forms of support to the AU’s South African presidency, and its keenness to cooperate with Pretoria to achieve the North- South axis project – The Cairo-Cape Railway, as it will have an important impact on establishing development projects.

They further discussed ways to develop bilateral relations and the overall situation on regional issues in the African continent.

In his opening speech, Shoukry highlighted the accomplishments achieved over the past year – during which Egypt presided over the African Union – on political, economic and development levels.

He also highlighted a number of topics to be addressed during the work of the union’s current session, including refugees, returnees, and internally displaced persons, which was the main topic addressed last year in the AU.

He also reviewed efforts of addressing the AU’s reform plans, including issues of assessments, state contributions, and funding for the Union, as well as the African Peace Fund, which is hoped to represent a true embodiment of the principle of providing African solutions to African problems.

On Friday, Egypt won membership of the AU’s Peace and Security Council for 2020-2022.