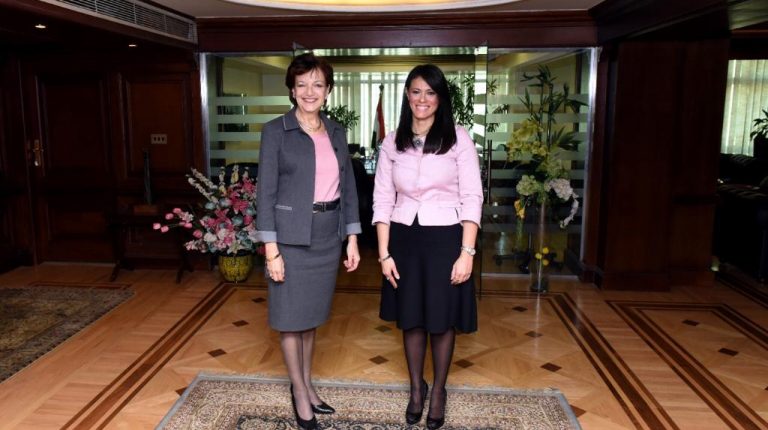 “The EIB is our strategic partner with bilateral cooperation since 1979. Our partnership has led to the implementation of multi-sectoral projects that have supported the socio-economic development and job creation in the country,” Al-Mashat said in a statement on Saturday.

For her part, Palanza said that the EIB stands ready to support Egypt with its financing of both the public and private sectors, in cooperation with the European Union (EU) and other international financial institutions (IFIs).

Besides expanding on its traditional areas of financing like in water, wastewater, energy, transport, and small and medium enterprises (SME), the EIB is interested to support new sectors related to climate change adaptation and mitigation, as well as social sectors like health and education, Palanza added.

The EIB expects in 2020, the first year of enhanced cooperation and numerous developed operations (which have been ongoing for some years now) to reach maturity, Palanza mentioned.

Egypt and the EIB have enjoyed a strong bilateral partnership since the beginning of its operations in Egypt in 1979, the statement said, adding that the EIB provided project financing of about €9.7bn to support Egypt’s efforts in modernising its economy.

The current Egypt-EIB portfolio is worth over €2.3bn and supports development projects in various sectors, including water and wastewater, transportation, SMEs, air navigation, environment, and energy.

In the water and sanitation sector, Egypt and EIB benefitted from EU grants and

reducing water scarcity and pollution levels, as well as contribute to the

Moreover, EIB helped finance the Cairo Metro lines, which serves over 2 million passengers every day, and helps reduce traffic and CO2 emissions in the capital.

Egypt benefits from EIB support through its Economic Resilience Initiative (ERI)which includes the Fayoum Wastewater Expansion Project and the Kitchener Drain Project in the Nile Delta aimed at improving sanitation services for over one million people.

The EIB is managing many grants provided by the EU in blending operations of about €67m for on-going projects, for example the Kafr El-Sheikh Wastewater Project, the Community Development Programme and others.

Under the EIB Risk Capital Facility (RCF), part of the EU Initiative for Financial

SMEs that will create over 1000 jobs.

More resources to boost entrepreneurship and foster social inclusion are also mobilised through the EIB intermediaries. For example, Banque Misr, through a €500 m financing facility has supported 500 SMEs and Mid-Caps in manufacturing, creating almost 5000 new jobs so far.

The EIB contributed to support the private sector with about €4.9bn, especially for SME’s, since the beginning of its operations in Egypt.

At the beginning of 2020, Egypt and the EIB signed new agreements for the

development of water, wastewater, and transportation sectors in Egypt, worth €122.7m.

New projects also include the feasibility study for the Rehabilitation of the Cairo Metro Line 2 and the complementary studies for the Tanta-Mansoura-Damietta Railway Upgrade, which reflect the continuation of EIB’s support to Egypt in the transport sector, focusing especially on railways, metros, and other public transport modes.