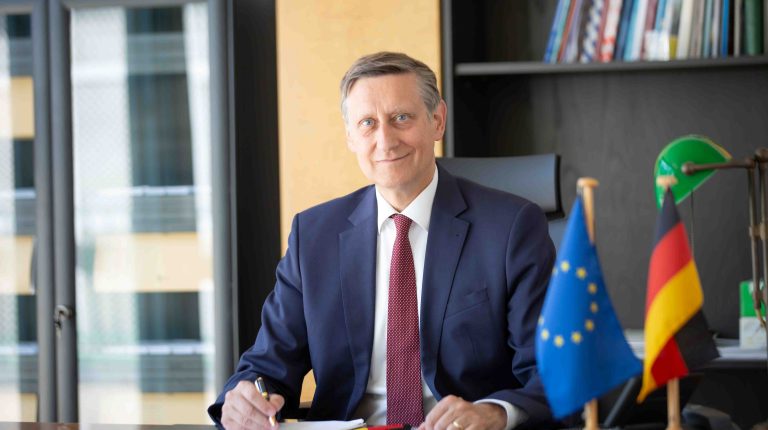 Egyptian exports to Germany amounted to about $1.5bn annually, while the value of German exports to Egypt is approximately $3bn.

German ambassador in Cairo Cyrill Nunn spoke to media for the first time since he took over the position in August 2019. He told Daily News Egypt that Egyptian exports to Germany are mostly textiles, raw materials, and agricultural products, however, petrochemical and industrial exports have recently increased.

Egyptian exports to Germany amounted to about $1.5bn annually, while the value of German exports to Egypt is approximately $3bn.

Nunn added that commercial relations between German and Egyptian banks and insurance companies are close now. Egypt has a respected credit rating by international agencies, as well as a good macroeconomic performance.

The ambassador disclosed that the banking sector in Egypt was not always completely transparent to external parties and the new law regulating the sector would help improve the situation.

What is the size of German investments in Egypt and which sectors?

We have about 1,180 companies operating in Egypt in different sectors, in which the German side has a majority or a minority stake of the capital. The total German capital in those companies is approximately $2.3bn.

Foreign investment in Egypt has traditionally been strong, mainly in the energy sector. Since last year, Germany increased investments in oil and gas exploration. Wintershall Dea, gas and oil operator, is competing for additional exploration areas and will invest accordingly. There are also major German investments in mining, electricity generation, and tourism.

From your point of view, what are the sectors that can attract foreign direct investments (FDIs)?

Egyptian industry is growing at an annual rate of 5-6%, and this percentage may rise further in the coming years. We see opportunities in all sectors, especially in the fields in which the Egyptian government creates legal frameworks that facilitates investment, as in the case of power generation. The openness in the mining sector is also a good indicator, and it is welcomed. There are many companies in logistics and transportation sectors that closely monitor the Egyptian market.

Is Egypt on Germany’s investment map? Have you received any market inquiries recently? If so, in which sectors?

Of Course, several German companies have inquired about the market conditions in Egypt last year. There is intensive German participation in trade fairs and exhibitions in Egypt.

Over and above, our Federal Ministry for Economic Affairs and Energy is actively working to encourage visits by delegations of German companies. For example, a German delegation interested in water and wastewater management will visit Egypt early February.

How do you see Egypt’s business environment?

Egypt’s legal environment has improved significantly over the past years which impacted positively on the business environment. The macro conditions of the economy allow the conversion of currencies in both directions. Egypt is also a destination close to Europe, with direct flights between Egypt and Germany taking only 3-4 hours. It is also very important that Egypt has young people eager to be trained and educated, whether in industry or service sectors. Besides, thanks to many German schools, we have now many Egyptian youth who can speak Arabic and German fluently, so that they can apply to jobs that require this skill.

What are the reforms that investors expect from Egypt to boost FDIs?

Basically, structural reforms must be implemented as agreed with the International Monetary Fund (IMF). Bureaucracy and red tape must be further reduced, and Egypt should simplify its administrative processes. The government’s war against corruption must continue. It is also important to keep in mind that in order to liberalise full creative power of the private sector and maximise job opportunities, Egypt should continue progressing in the field of civil liberties.

How much is the value of Egypt-Germany trade exchange?

German exports to Egypt reached approximately $3bn annually, most of which are industrial products. Egyptian exports to Germany recorded roughly $1.5bn annually, most of which are textiles, raw materials, and agricultural products, but also increasingly there are petrochemical and industrial products. This is a good sign that Egypt’s industry has become more competitive in the global market, especially in the field of electrical and electronic equipment, plastics, and finished industry.

We must also mention that the balance of payments between the two countries is better than what these numbers may indicate because many German tourists visit Egypt every year, and one of those tourists may also see Egypt as a destination for future business.

How many German companies operate in Egypt?

German companies are not obligated by law to register at the embassy. In fact, we know that the aforementioned 1,180 companies include about 250 companies that have an active membership in the German-Arab Chamber of Industry and Commerce.

Have any Egyptian banks obtained financing from German banks recently?

There are close commercial relations between several German and Egyptian banks and insurance companies. Egypt has a respected credit rating by international agencies, and a good macroeconomic performance. However, the banking sector in Egypt is not always completely transparent to outside parties, but the new law regulating the sector will help improve the situation.

Do you expect new German investments to be announced this year?

I’m sure we’ll see more business this year. We also hope for some new investments.