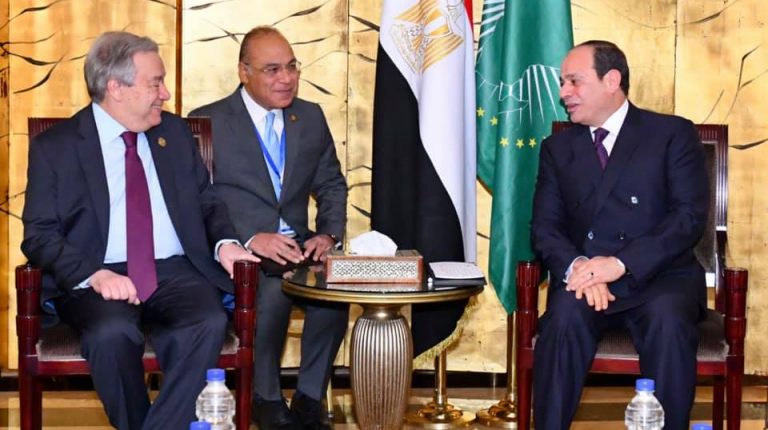 President Abdel-Fattah Al-Sisi met on Sunday Secretary-General of the United Nations Antonio Guterres, Algerian counterpart Abdelmadjid Tebboune, and  Canadian Prime Minister Justin Trudeau on the sidelines of the 33rd African Union (AU) Summit in Addis Ababa, Ethiopia. In this summit Egypt will hand over the AU chairpersonship to South Africa.

During the meeting with Guterres, Al-Sisi expressed Egypt’s keenness to strengthen cooperation with UN organisations in various fields, to support international peace and security, as well as coordination with the international organisation to enhance its primary role in dealing with issues with high priority for developing countries.

Al-Sisi and Guterres addressed the latest developments in Libya, Syria, and the peace process in the Middle East. The president stressed the importance of working to implement the commitments that were agreed by the parties of the Berlin Summit on Libya, and avoiding any difficulties or challenges in this regard.

The president also reviewed the priorities that Egypt pushed during its presidency over the AU, which were mainly aimed at continuing the progress made in implementing the international development agendas in Africa. It also promoted projects of regional integration, as well as achieving concrete steps in the path of conflict settlement and prevention of conflicts across the continent.

He also commended Al-Sisi for the determined efforts and intense activity during Egypt’s presidency of the African Union, and strengthening and deepening the strategic partnership between the AU and the UN.  Guterres further expressed the UN’s keenness to strengthen and support cooperation with Egypt to lay the foundations of peace, stability, and development at the regional level.

Al-Sisi met with his Algerian counterpart Abdelmadjid Tebboune, to address issues in mutual concern between Cairo and Algeria. The president congratulated Tebboune for his victory in the Algerian presidential elections.  During the meeting, Al-Sisi stressed the historic ties between the two countries, and Egypt’s aspiration to develop bilateral relations with Algeria and advance the frameworks of joint cooperation in various fields, especially economic, commercial, and investment.

The president stressed Egypt’s support to Algeria in facing terrorism, especially in the Sahel region, and support for the measures taken by the Algerian leadership in order to maintain security in the country. He pointed out that Egypt and Algeria are facing similar conditions and challenges, and expressed the need to strengthen security coordination and exchange information on terrorist groups.

For his part, the Algerian president affirmed his country’s optimism on its distinguished ties with Egypt, praising its achievements over the past few years.

During the meeting, the two presidents exchanged visions on a number of regional issues of mutual concern, especially the Libyan crisis as Egypt and Algeria are bordering countries to Libya. Al-Sisi and his counterpart agreed on the need to intensify coordination in order to end the crisis through a political solution that paves the way for the return of security and stability in Libya, and undermine foreign interventions in the country.

On Saturday night, the president met with Canadian Prime Minister Justin Trudeau, as the two leaders discussed bilateral relations between Cairo and Ottawa and the Canadian-African relations. During the meeting, Al-Sisi highlighted the importance of working to consolidate these relations at all political, economic, and commercial levels, in a way that serves the mutual interests of the two countries.

The meeting discussed cooperation in combating terrorism and extremist ideologies, as well as the economic cooperation between the two countries in light of the Egyptian efforts to improve the business environment, encourage the private sector and attract foreign direct investment, as well as a review of opportunities for further cooperation in higher education to benefit from Canadian educational systems. They also addressed the situation in the Middle East and ways to reach political solutions to the existing crises in the region.

For his part, the Canadian prime minister praised the progress made by Egypt during the past years in terms of economic reform and achieving comprehensive development.