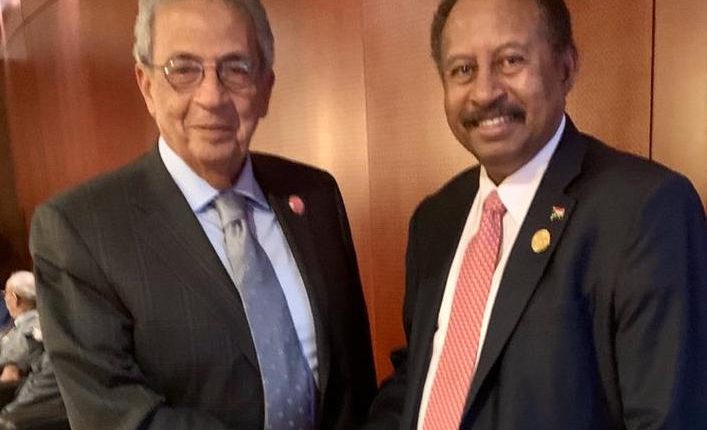 Egyptian diplomat Amr Moussa, the chairperson of the African Union Panel of Wise, met on Sunday with Abdullah Hamdouk, the Prime Minister of Sudan on the sidelines of the 33rd African Union (AU) Summit in Addis Ababa, Ethiopia.

During the meeting, Moussa congratulated Hamdouk on assuming responsibility, and expressed best wishes to the people and government of Sudan following the latest political developments.

Moussa and Hamdouk discussed the situation in Sudan in light of current developments, as well as mandating the African Union Panel of the Wise, along with Sudan, Zimbabwe, and a number of African nations, to address the lifting of sanctions imposed on Sudan since the former military regime of Omar Al-Bashir.

The two parties agreed to arrange a future visit for the committee members to Khartoum to find out the details and for further discussions on the issue.

The new civilian government led by Hamdok was announced in September 2019. It is the first government after the ouster of Al-Bashir on 11 April, following protests against his policies.

The government includes 20 ministers, 18 of whom are announced by the prime minister, and two others are scheduled to be named later. It contains four female ministries including Asmaa Abdullah as Sudan’s first female foreign minister.