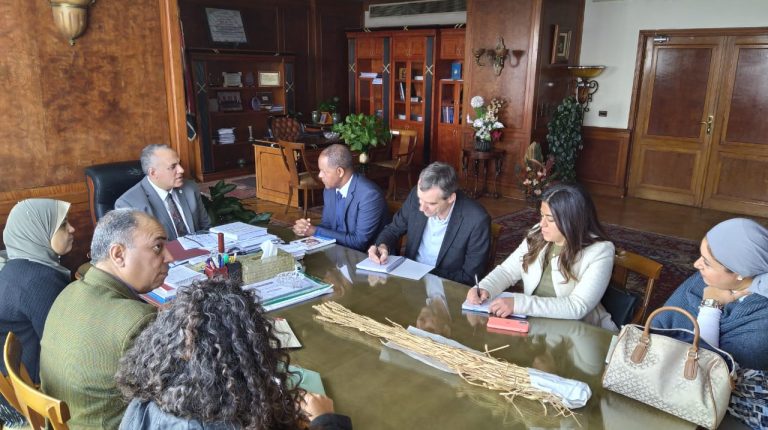 Minister of Water Resources and Irrigation Mohamed Abdel-Ati met on Monday with Menghestab Haile, country director and representative of the World Food Program (WFP) in Egypt, to discuss the programme’s projects in the country, particularly in Upper Egypt.

During the meeting, which was held in the presence of the executive leaders of the ministry and representatives of the Dutch embassy in Cairo, Abdel-Ati stressed the importance of using modern irrigation systems like sprinklers, drip irrigation, and subsurface irrigation to both new and old lands instead of flooding irrigation.

He further highlighted the importance of educating farmers about the positive impact of using modern irrigation systems to raise productivity while raising the efficiency of water use and increasing the value of the return from the water unit.

The meeting also addressed adding a component to introduce modern irrigation systems to farmers in a number of experimental fields to be among the components of the WFP’s projects in Upper Egypt villages. This project will begin in villages in which farmers’ small properties were gathered.

The minister pointed to the competition held by the Ministry among farmers through Cairo Water Week (last October) to document and stimulate best agricultural practices to rationalise the use of water and raise the yield from the water unit. Several farmers have introduced modern irrigation systems in their lands that led to water supply and increased productivity.

Egypt has started a new cooperation programme with the Dutch government funded by a grant estimated at about €25m. The grant will be dedicated to dealing with the topics of water resources management and food security. The Dutch government is financing part of the activities of the WFP in Upper Egypt in order to reinforce the programme’s food security, and also funding the transformation of flood irrigation systems into experimental modern irrigation systems under the programme’s water management component.