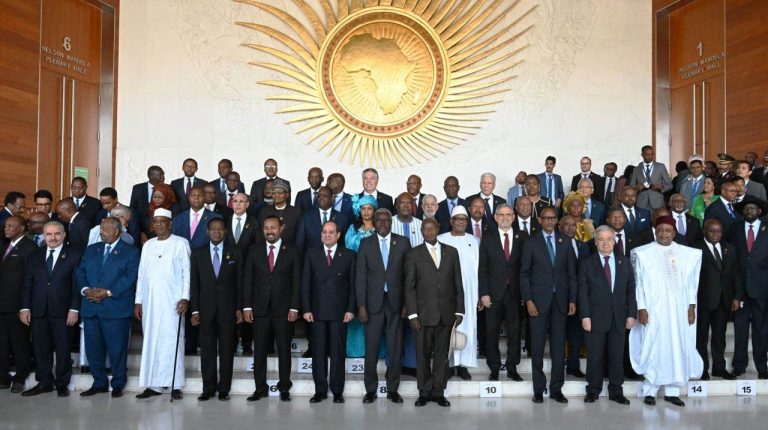 Egypt’s President Abdel Fattah Al-Sisi on Sunday handed over the rotational presidency of the African Union (AU) to South Africa at the 33rd AU Summit in the Ethiopian capital of Addis Ababa under the theme of “Silencing the Guns.”

Egypt adopts the principle of “African solutions to African problems,” Al-Sisi said, referring to hosting two summits on Libya and Sudan, and applied this approach on several issues in Guinea-Bissau, South Sudan, and Central Africa.

In this context, Al-Sisi called for a summit to discuss establishing an African joint task force to maintain peace in conflict areas and combat terrorism. He expressed Egypt’s willingness to host the summit, stressing that one of Egypt’s responsibilities in the continent is to achieve peace and security.

The proposed African force should be under the supervision of the AU’s Peace and Security Council as well as the Specialized Technical Committee on Defense, Safety and Security (STCDSS), calling for extensive consultation on all organisational and substantive sides of the issue.

Chairperson of the AU Commission Moussa Faki said the American peace plan in the Middle East would not solve the Palestinian-Israeli conflict, explaining that the AU must enhance solidarity and cooperation among African states. The proposed US peace plan will exacerbate the situation between Palestine and Israel.

Faki praised Egypt for its efforts in pushing the African agenda on the international scene during its chairpersonship of the AU in 2019. He asserted that terrorism remains a major challenge in several African countries.

Moreover, Secretary-General of the United Nations (UN) Antonio Guterres asserted the importance of international cooperation with African countries, expressing the UN’s support for African initiatives: the 2030 Agenda for Sustainable Development and 2063 Agenda, in addition to “Silencing the Guns” campaign.

Silencing the Guns aims to promote prevention, management, and resolution of conflicts in Africa. It targets silencing all illegal weapons in Africa.

Guterres added that achieving sustainable development in Africa needs to eliminate the phenomenon of terrorism, noting that achieving gender equality in the continent would contribute greatly to solve many problems such as poverty.

It is the time to remove Sudan from the US list of “State Sponsors of Terrorism,” highlighting Sudanese counterterrorism efforts and the country’s peaceful transitional period, stressing the necessity to achieve a political solution for the conflict.

Sudan was designated as a State Sponsor of Terrorism in 1993 for having al-Qaeda inspired terrorist groups. However, the government took steps to limit the activities of such groups, and end the use of Sudanese territories as a transit point for terrorists in Mali, Syria, and Afghanistan.

The UN called for political resolution to the conflict in Libya, supporting the negotiations between both conflicting sides, which had started in Geneva last week.

In the Geneva meeting, the United Nations Support Mission in Libya (UNSMIL) asserted the importance of maintaining the truce that had been announced on 12 January.

The Libyan warring sides also expressed their support for ongoing prisoner exchange, return of mortal remains, and welcomed the UNSMIL support in this process. They also agreed to continue negotiations on 18 February, in order to reach a comprehensive ceasefire agreement.

Aboul Gheit affirmed the need to resolve the Libyan issue without foreign interference. He also called for enhancing cooperation to support Somalia and Comoros. He also hailed Al-Sisi’s contributions to the AU, including launching the African Continental Free Trade Area, adopting an integrated vision for the institutional reform of the AU, and setting the framework of the 2063 Agenda.