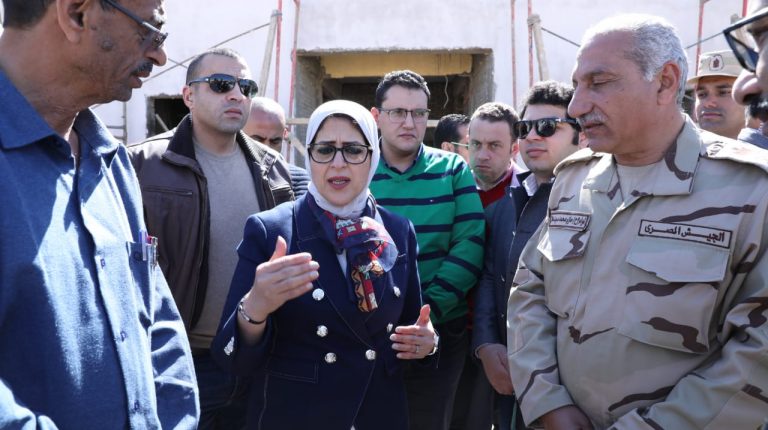 Minister of Health Hala Zayed announced on Tuesday that 52,404 citizens in South Sinai registered for the new comprehensive health insurance system since the registration began in October.

Zayed made a follow up visit to the Wadi Tal Family Health Unit in Abuznaimh, South Sinai, as part of preparations for the new comprehensive health insurance in the governorate.

For his part, Khaled Mogahed, spokesperson for the ministry, said that the minister ordered  quick completion of the Wadi Tal Family Health Unit’s construction according to schedule, and that she stressed the necessity of training human cadres to raise their professional competence in tandem with development work.

He further added that “the unit serves the local communities due to its presence in a mountainous region, where the minister stressed taking into account the standards of the General Authority for Accreditation and Supervision of the new comprehensive health insurance, in construction and equipment of the unit, as well as the speed of supplying medical and non-medical equipment.”

South Sinai Governorate is one of the five provinces planned for the comprehensive health insurance system’s first phase. This phase includes Ismailia, Suez, Luxor, Aswan, and South Sinai, where registration of citizens started back in October 2019. This comes in preparation for the new system’s implementation, in addition to Port Said, where the system was launched in July 2019.

In May, Zayed pointed out that the new comprehensive health insurance project is being implemented in the first phase governorates in accordance with the set timeline, noting that the sum of EGP 17.5 bn, which was requested to support the budget of the ministry is part of a total amount of EGP 33.5 bn needed for supporting the medical sector.

Last week, Prime Minister Mostafa Madbouly expressed his intentions for doubling expenditure on health in the new fiscal year. The current allocations for health in the current budget are EGP 73 bn, and according to the cabinet’s statements this amount is expected to reach EGP 146 bn in the upcoming budget.