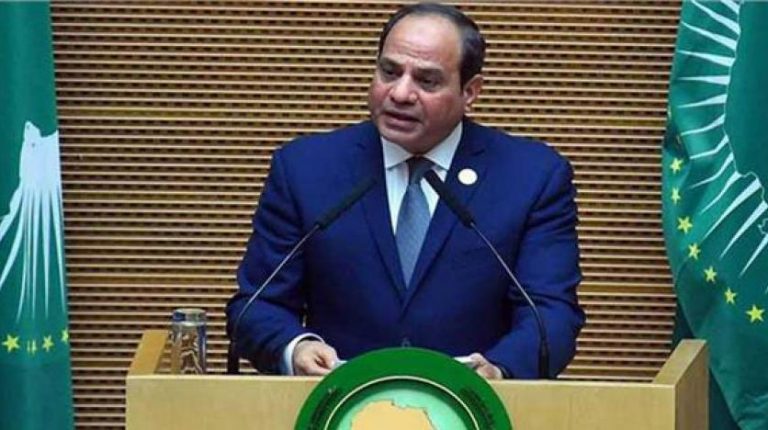 This week witnessed the end of Egypt’s one-year rotational chair of the African Union (AU). Several political pundits agreed that Egypt contributed, during that period, to reforming the continental body and enhancing coherence among its members in different fields.

President Abdel Fattah Al-Sisi on Sunday travelled to Addis Ababa to participate in the 33rd AU Summit, where he handed over the AU presidency to South Africa.

In 2019, the Egyptian political leadership worked on several levels in the interest of the African peoples, and to promote cooperation between Egypt and African countries. It outlined six priority areas: economic and regional integration, bridging the gap between African nations, boosting cooperation with international partners, economic and social development, institutional and financial reform of the AU, and achieving peace and security.

The 2019 AU presidency was considered as a boost for Egyptian diplomacy and foreign policy, which came in line with Al-Sisi’s approach, since he came in power in June 2014, to establish strong relations with the African continent.

Mostafa Abu Zaid, director of the Egypt Center for Economic and Strategic Studies, said Egypt played a pioneering and pivotal role during its presidency of the AU, as it adopted economic strategies and initiatives to enhance cooperation with the neighbouring African countries.

Abu Zaid added that the government and the banking sector took several steps to support the bonds of cooperation with Africa, including the launch of The Sovereign Fund of Egypt to support human resources in the continent and the inauguration of several exhibitions and events to promote free trade in the continent through the Ministry of Trade and Industry and the African Export–Import Bank.

Several cooperation protocols were signed between the General Authority for Investment and Free Zones and some African countries including Tanzania to finance the building of Stiegler’s Gorge dam through loans from Egyptian banks, and to provide technical support in the field of renewable energy.

Egypt also addressed major political and economic challenges in the continent, which recovered the country’s diplomacy after long absence. Handing over the AU presidency to South Africa did not mean that Egypt would stop working for the interest of the continent, but its role would be actually more stronger.

Ikram Badr El-Din, a political science professor in the Cairo University, said Egypt, during its presidency of the AU, managed to attract the world’s attention to the continent, making great impact in different areas.

He added that Egypt carried out intensive and significant activities, including high-level meetings held by Al-Sisi with other countries and representing the continent in international events, such as the Tokyo International Conference on African Development, the Russia-Africa Summit and Economic Forum, the Forum on China-Africa Cooperation, and the German African Business Summit.

Egypt presented a positive image of African before the world and shed the light on the continent’s promising opportunities for investment and the possibility of joint cooperation to achieve development, Badr El-Din said. Egypt also supported African-African integration and with other countries around the world.

Additionally, Egypt launched an initiative to treat one million African HIV and Hepatitis patients and held a youth conference on how to respond to HIV-related stigma and discrimination. As for countering armed conflicts, Egypt contributed to the launch of Silencing Guns 2020 initiative, and won membership of the AU Peace and Security Council for 2020-2022.

Tarek Fahmy, a political science professor in the American University in Cairo, said Egypt successfully represented the African continent in world events, presenting clearer and more stable vision, which attracted major countries to launch development projects in Africa, such as the G20 Summit.

Moreover, the State Information Service (SIS) said Al-Sisi was keen to attend different international forums to showcase concerns and hopes of the African nations, where he called on major businesspeople and international companies to invest in the continent.

In terms of economic integration, Al-Sisi helped development of the African Continental Free Trade Area (AfCFTA), accelerating intra-African trade and boosting Africa’s trading position in the global market by strengthening Africa’s common voice and policy space in global trade negotiations. Egypt announced in May 2019 that the AfCFTA went into force after being ratified by 22 countries on the continent, and entered its operational phase following a summit in July 2019. Also, Egypt organised the Investment for Africa Forum and the Arab-African Investment Conference to stimulate investment in the continent.

In April 2014, Al-Sisi went on a tour in West Africa (Guinea, Ivory Coast, and Senegal) to enhance Egypt’s relations with these countries and discuss ways to increase economic cooperation in this region.

As for peace and security issues in Africa, Egypt brokered talks to solve the dispute over maritime territory in the Indian Ocean between Kenya and Somalia, contributed to launching Silencing Guns 2020, hosted political negotiations over the Sudanese crisis, and pushed for political settlement to the Libyan crisis. In December 2019, Egypt signed an agreement with the AU to host the African Union Center for Reconstruction and Development.

As for youth and education, in November 2018, at the closing ceremony of the World Youth Forum, Al-Sisi announced that Aswan would be the capital for African youth. In March 2019, the Association of African Universities launched its North Africa Regional Office at Al-Azhar University in Egypt in a move to decentralise the association’s activities and increase its visibility and impact in the region.

A committee for African affairs in Al-Azhar was formed, and relief and medical convoys were sent to different African countries in an attempt to boost cultural coexistence and tolerance. Al-Azhar University and its institutes annually receive students from 46 African countries, provide training for clerks on how to confront extremism and deal with controversial issues, and establish institutes and centers for teaching the Arabic language.

Al-Sisi issued directives to all Egyptian state agencies to enhance cooperation with their African counterparts in all fields, which resulted in many cooperation programmes.

In the field of energy, Egypt supported the efforts of African countries to produce energy from renewable resources, under the Africa Renewable Energy Initiative, since its inception in 2015, which is set to achieve at least 10 GW of new and additional renewable energy generation capacity by 2020, and mobilise the African potential to generate at least 300 GW by 2030.

In cooperation with the AU and China, Egypt launched an initiative to provide electricity to more than 600 million people in Africa.

In the field of transportation, Egypt launched the Cairo-Cape Town Highway and a project to link the navigation line from Lake Victoria to the Mediterranean Sea. The Ministry of Civil Aviation also started operating air flights to Douala (Cameroon), Kigali (Rwanda), and Abidjan (Ivory Coast).

In addition to Al-Sis’s tours in Africa, several Egyptian political, economic, and other state institutions played major roles in the promotion of Egyptian-African relations.