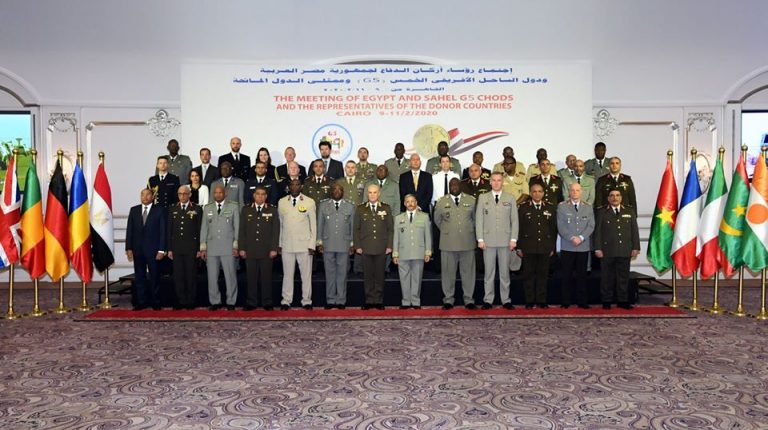 Chief of Staff of Armed Forces Mohamed Farid headed a meeting of the Chief of Staffs of the G5 Sahel African Countries of Burkina Faso, Chad, Mali, Mauritania, and Niger, which was headed by Farid, with the participation of representatives of the European donour countries.

During the meeting which was held in Cairo from 9-11 February, Farid said it is part of Egypt’s efforts during presidency of the African Union to discuss a number of issues of great importance to the continent, including the Libyan crisis.

Egypt has won the membership of the AU Peace and Security Council 2020-2022.

He noted that Egypt is preparing to host an African summit that aims to establish an African force to combat terrorism in the Sahel countries, stressing that the Egyptian armed forces work hard to meet all the African issues.

The representatives also of the five countries hailed the Egyptian efforts in the 33rd African Union summit, which was held in Ethiopia’s capital of Addis Ababa.

Within the two-days meeting, they discussed the security situation in the Sahel region and ways to enhance military cooperation to address issues of common concern.

Egypt had also reviewed its vision for supporting the capabilities of the five African Sahel countries, in addition to offering a training programme in the field of combating terrorism.

Egypt won the membership of the AU Peace and Security Council with an overwhelming majority in first round of the election, which was held on the sidelines of the AU Executive Council meetings in Addis Ababa.

Members of the council are elected by the Assembly of the AU under some criteria including the capacity to contribute militarily and financially to the AU.