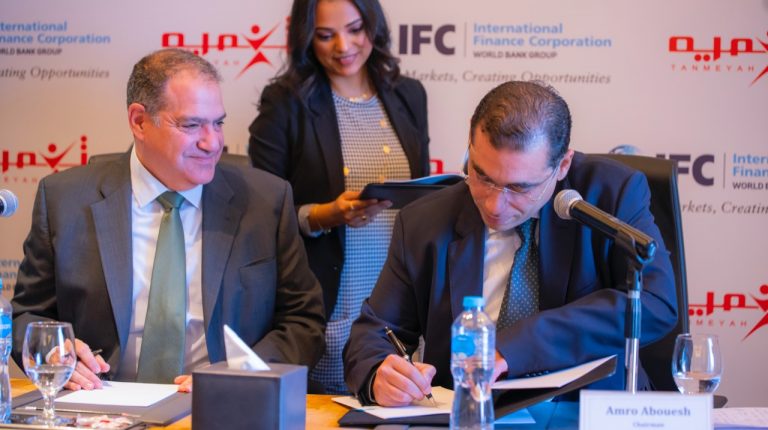 International Finance Corporation (IFC), a member of the World Bank Group, signed an agreement with Egypt’s microfinance organisation Tanmeyah, to help boost its sustainability and outreach to underserved groups across the country, according to press statement on Wednesday.

IFC’s advisory services team will work with Tanmeyah, which commands almost a quarter of the microfinance market in the country through 259 branches, to identify and help rectify any areas of weakness. The two-phase project will include a strategic review of Tanmeyah’s current loan products, an in-depth risk management diagnostic, and a review of its human resources.

The findings will inform the second phase of the project, during which IFC will help Tanmeyah implement the key recommendations based on its priorities.

Chairperson and CEO of Tanmeyah Amr Abouesh said, “Micro-finance has been increasingly proving highly successful as a way to end the cycle of poverty, decrease unemployment, increase earning power, and aid the financially marginalised. Despite being a young and vibrant segment of the population, the majority of Egyptian small businesses remain outside the scope of the traditional banking industry. This agreement will help us address the financing needs of this under-served group”.

Egypt had high unemployment rates and a strong micro, small, and medium enterprise (MSME) sector would be critical to spur job creation and economic growth in the country, IFC highlighted.

The statement noted, “Only a third of adults have access to a bank account, while the formal MSME finance gap was estimated at $46.7bn in 2017, representing a significant opportunity for financial institutions to increase their outreach to individuals and the sector.”

IFC Country Manager for Egypt, Libya, and Yemen Walid Labadi said, “Our goal is to deepen financial markets and promote financial inclusion in Egypt. Identifying and supporting strong microfinance institutions (MFIs) like Tanmeyah will ultimately result in more sustainable growth and greater outreach, spurring growth and helping to unleash the full potential of this sector.”

The agreement is part of IFC’s wider strategy to expand access to finance and boost financial inclusion in Egypt. It marks the first project under the joint World Bank–IFC Micro, Small and Medium Enterprise programme for the Middle East and North Africa. It aims to promote sustainable job creation and boost private sector-led economic growth across the region. The programme is supported by the governments of the Netherlands, the United Kingdom, Sweden, and Switzerland.