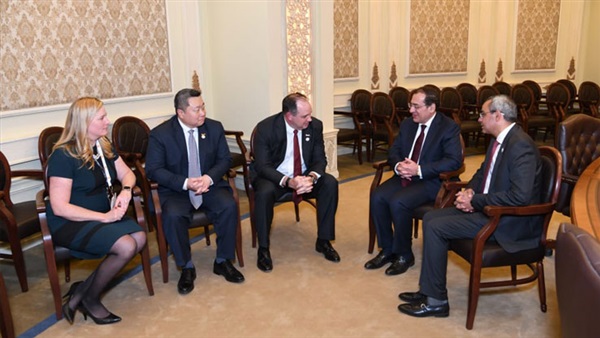 The meeting came on the sidelines of the Egypt Petroleum Show 2020 (EGYPS 2020). Apache is the top producer in the Western Desert.

El-Molla added that there is a possibility to achieve oil discoveries in new geological layers and producing unconventional oil through non-traditional techniques, stressing his aspiration to intensify cooperation between the two sides in exploiting such opportunities.

For his part, Christmann stressed Apache’s commitment to maintain its investments in Egypt and raise the efficiency of operations, and increase production.

He pointed out that the recently implemented seismic survey programme in the Western Desert showed positive results that reflect promising possibilities of oil discoveries, which could lead to an increased production rate in the near term.

Apache plans to drill more wells in the Western Desert during the coming period in light of these results, he added.

Also, on the side-lines of EGYPS, El-Molla met with his Somali counterpart Abdirashid Mohamed Ahmed, where they signed a memorandum of understanding (MoU) to boost oil and gas bilateral cooperation.

The MoU also aims to transfer Egyptian oil and gas experiences to Somalia through establishing cooperation between the oil and mining sector companies in both countries.

El-Molla said that such agreements improve cooperation between Egypt and other African countries, using Egyptian expertise in favour of industrial development efforts throughout the continent and in what also contributes to opening new fields of work for oil sector companies outside Egypt.