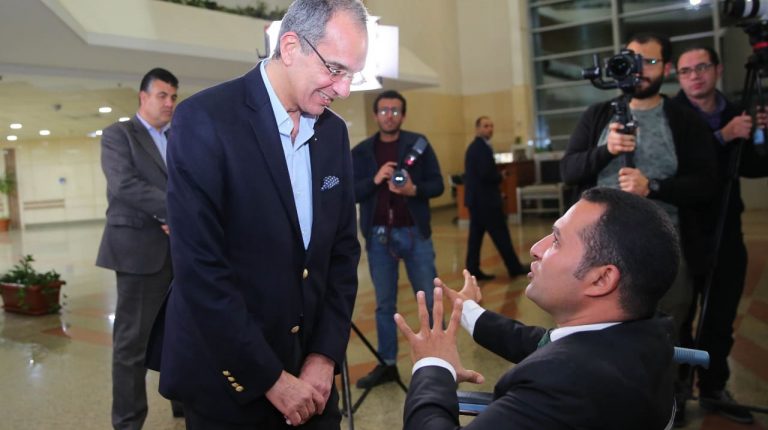 Communication and Information Technology Minister (CIT) Amr Talaat concluded the City Hackathon for Persons with Disabilities, which was organised by the National Academy of Information Technology for Persons with Disabilities from 12 to 14 February in cooperation with the British Cultural Centre and the University College London, the Centre for Global Disability Innovation, and Microsoft International.

The Hackathon is an innovative competition in which the developers of smart solutions meet to create technological solutions to challenges in a period of 54 hours. It aims to create a technologically advanced environment in modern cities to integrate persons with disabilities and help them go about their daily lives in an equal and independent manner. This is in line with the vision of the Ministry Communications and Information Technology (CIT) to integrate persons with disabilities into society using information technology.

In his speech during the closing ceremony, Talaat said that the CIT will continue its efforts in supporting all initiatives aimed at making technology more accessible and assist children with special needs.

He explained that one of the most important characteristics of the hackathon this year was the inclusion of people with disabilities and young people, which sends a strong message of equality.

During the hackathon, the participants presented many innovative technological solutions and ideas that contribute to overcoming the challenges that were included in this year’s hackathon, and several workshops were held in cooperation with the University College London and Microsoft International in the areas of artificial intelligence, the Internet of Things, and a discussion of how technology can contribute to achieving digital transformation.

The Irshad team won first place for a project that offers a system based on artificial intelligence that allows people with visual impairment to recognise things, measure distances for them, and distinguish between them, through a mobile application for people with disabilities.

Team B also won second place for a project that provides an integrated system using optical proximity technology for people with visual impairment consisting of an advanced environmentally friendly stick, and a smart tape equipped with sensors that are placed in metro stations and streets, making it easier for people with visual disabilities to find their way and alert them in the event of an obstacle.

Team Error 404 won third place for a project that provides a system consisting of an electronic application for people with visual impairment that enables them to book public transport trips and alert them of their bus arrival.

The Team Get Access won fourth place for a project that relies on the use of 3D printing technology, where multiple accessories that can be installed on a wheelchair have been developed to enable people with motor disabilities to perform different tasks independently.

Fifth place was given to the PIx wheels application, which provides a system based on the use of image analysis technology and artificial intelligence that enables people with “quadriplegia” to move their wheelchair with their eye movement.