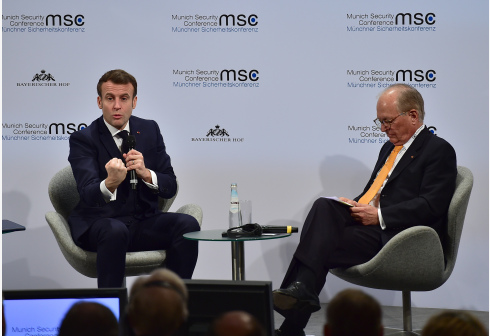 French President Emmanuel Macron on Saturday called for a European strategy and more actions at the European level in the face of challenges at the ongoing 56th Munich Security Conference (MSC).

It was Macron’s first time attending the MSC since he canceled his trip to the conference last year.

Macron admitted that there is a certain weakness in the West in the last 10 to 15 years, with values changing and new powers emerging.

The French president called on his European counterparts to forge a “European strategy,” hoping to see “a Europe that can protect the basis of its sovereignty, a Europe that has more vitality, and a Europe that is enthusiastic about its future.”

Macron said Europe needs to develop their own European policy, instead of a transatlantic policy, when it comes to relations with neighbors such as the Middle East, Russia and Africa.

The EU needs to have a budget in proportion with its ambitions and needs, he said.

Commenting on the Franco-German bilateral ties, Macron said it is often a story of “proposals waiting for answers,” emphasizing the magnitude and speediness needed for the two countries to address core problems together.

Defending his position on relations with Russia, Macron said that he is neither anti- nor pro-Russia, but rather “pro-European.” He said Russia will need European allies in the long run and it remains an option for Europe to restart strategic dialogue with Russia as “today we talk less and less, conflicts multiply and we aren’t able to resolve them.”

Macron also talked about issues concerning the EU enlargement. In October last year, the bid by Albania and North Macedonia to open EU accession negotiations was blocked mainly because of France’s opposition. Paris justified its decision with the need for the EU to develop a new accession methodology.

Macron said Saturday that there will be an EU report coming up in March about the progress made by the two countries, and that France is in a position to back the negotiations if the results are positive and confidence is established.