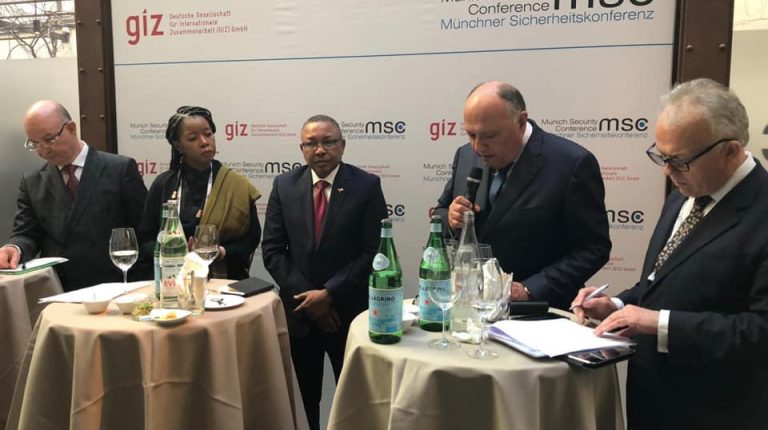 Egypt’s Minister of Foreign Affairs Sameh Shoukry participated on Saturday in the session on regional security in North Africa, on the sidelines of the 56th Munich Security Conference (MSC), in Munich, Germany.

At the session, Shoukry reviewed the main crises in the region which include; terrorism, political instability, developmental challenges, negative impacts of climate change, and illegal migration, in addition to other challenges.

He further reviewed Egypt’s vision related to these topics, highlighting Egypt’s keenness on activating the principle of African solutions for the continent’s problems during its chairmanship of the African Union last year.

The minister pointed out the importance of North African and Middle Eastern countries in adopting a strategy that combats these threats while optimising the use of their already scarce recourses, like water, during a generation that is reaching overpopulation.

Shoukry is set to take part in some events and sessions on the sidelines of the conference to review Egypt’s perspectives on regional and international issues. He will also hold some meetings and discussions with high ranking international officials who are participating in the event.

Meetings will address means of supporting collaboration and consultation relations in issues with mutual concern. Main issues to be discussed in the conference include the situation in Iraq, Afghanistan, and Middle East. Also, relations with Iran will be addressed.

One of these meetings was with Dutch Minister of Foreign Affairs Stef Blok, who discussed with Shoukry bilateral cooperation between Cairo and Amsterdam, as well as the Libyan crisis.

MSC this year will focus on the future of the European Union (EU) and major security and political challenges that the world is currently facing. The summit will end on Sunday with the participation of more than 500 politicians, officials and spies, including thirty-five heads of state.

The conference’s theme this year is “Westlessness,” the loss of the common standing of what it means to be part of the West,  and the idea that both the world in general and Western countries themselves are uncertain of their values and their strategic orientation, according to a security report published on Monday.