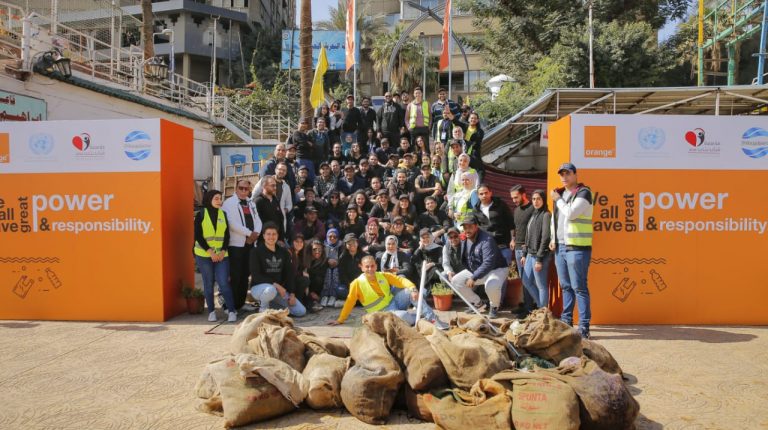 In support to the great efforts of the Egyptian state to raise awareness about water conservation and the importance of the Nile River, and in the presence of Eng. Ibrahim Al Shihabi, Deputy Governor of Giza, Professor Hind Abdel Halim, Deputy Governor of Giza, Professor Tayseer Abdel Fattah, President of the South Giza District, Engineer Atef Mabrouk, Nile protection president in Greater Cairo, Mr. Mahmoud Maghrabi, Director of Giza Sea Scout Club and Basma Dawood, Miss Eco Egypt 2020, Orange Egypt ,the fastest network in Egypt, announced its participation in a multi-purpose environmental campaign to remove plastic and organic waste from the Nile river in cooperation with the Youth Loves Egypt Foundation.

Orange Egypt’s employees participated in collecting plastic and organic wastes from the Nile River, and sorting them out in plastic bags according to type. Then, the collected waste was handover to YLE Foundation which will then handle the waste recycling process.

The campaign which coincides with Egypt’s vision 2030 for sustainable development strategy started with a detailed presentation from Mr. Ahmed Fathi, President of “Youth in Love Egypt” Foundation highlighting the goals of the campaign and how to safely dispose harmful plastic and organic wastes.

The campaign, in which Orange Egypt participated out of its Corporate Social  Responsibility, aimed to highlight the danger of throwing plastic and organic waste in the Nile River in addition to raise awareness about the negative effects of these wastes on the Nile River and the marine life that directly jeopardize the health of Egyptians.

On this occasion Hala Abdel Wadood, Head of Public Relations and Corporate Social Responsibility at Orange Egypt, said: “We are very pleased to be involved in this noble goal through which we seek to achieve tangible results, the most important of which is water and how to preserve it from pollution, besides encouraging and urging Egyptians to pursue the appropriate attitude in their lives.”