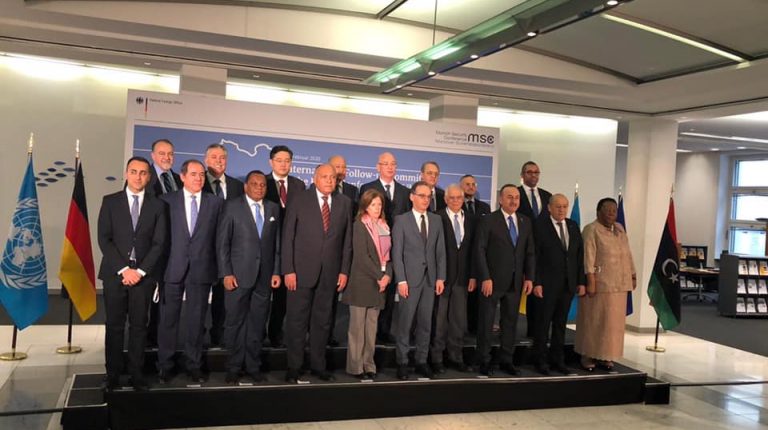 Egypt’s Minister of Foreign Affairs Sameh Shoukry participated on Sunday in the ministerial meeting of the international committee on Libya, on the sidelines of the 56th Munich Security Conference. It followed up on the outcomes of Berlin Conference to settle down the Libyan conflict.

In his speech during the meeting, Shoukry reviewed Egypt’s vision on the Libyan issue, which is based on political solution to restore security and stability in the country.

The minister welcomed the outcomes of the talks between Libya’s rivals in Geneva two weeks ago, which aimed to reach a ceasefire after 10 months of fighting on the outskirts of the capital, Tripoli.

In that meeting, five senior officers representing the Libyan Arab Armed Forces (LAAF) and five officers aligned with the UN-recognised Government of National Accord (GNA) formed the “Libyan Joint Military Commission” to discuss a ceasefire in accordance with the outcomes of the Berlin Conference.

Berlin Conference was held about three weeks ago to support the efforts of UN Secretary-General António Guterres and his Special Representative Ghassan Salamé to end the conflict in Libya.

Shoukry stressed the necessity of building on the outcomes of the meetings hosted earlier by Cairo and gathered military officers from different Libyan regions. He further stressed the importance of combating terrorism and stopping the flow of foreign fighters into Libya.

According to a statement from the foreign ministry spokesperson Ahmed Hafez, Shoukry hailed the results of the economic committee held in Cairo on 9-10 February, stressing that the importance of giving the economic course priority.

The minister said that it is highly important to focus on restoring legality of the Libyan institutions, including the reforming the presidential council. He also warned of attempts of some political sides to dominate the upcoming talks in Geneva on 26 February.

Moreover, Shoukry participated in a roundtable on Saturday for several chairpersons of the Agora Companies. During the meeting, Shoukry reviewed Egypt’s efforts and achievements during its chairmanship over the African Union.

He said that Cairo focused on the necessary linking between sustainable development and peace. He pointed out to the beginning of work on the African free trade zone.

The minister addressed some of the international and regional political and security challenges including terrorism, illegal migration, climate change, and cyber security. He also pointed out to the Palestinian Cause and the situation in both Syria and Libya.

Furthermore, Shoukry addressed the measures taken by the Egyptian government to implement the national economic reform programme. He noted that the Egyptian market, as an important entrance to Afric, would provide good opportunities for foreign investors, particularly after the success of the economic reform.

He also met with Spain’s Minister of Foreign Affairs, European Union and Cooperation Arancha Gonzalez, as the two ministers addressed the distinguished level of bilateral relations between Cairo and Madrid.

The Spanish Minister stressed the importance of Egypt’s role as a major partner in the region and a gateway to Africa, stressing the peculiarity of the Mediterranean region. She expressed her aspiration to strengthen bilateral relations with Egypt in various fields. The Spanish minister was keen on listening to the Egyptian vision regarding some regional issues of common concern, especially the developments in Libya and the Palestinian cause.

Moreover, Shoukry met with Austrian Minister of Foreign Affairs Alexander Schallenberg. During the meeting, Shoukry stressed the importance of strengthening relations with Austria in various fields, which reflects the strength of political relations and the capabilities available to both sides.

He also touched on Egypt’s keenness on coordinating with the Austrian side in the fight against illegal migration, and reviewed the existing cooperation with European countries in this regard.

This, the meeting witnessed exchanging views on regional issued of common concern, foremost of which is the peace process in the Middle East and ways to solve the Libyan crisis.

On the Arab level, the Egyptian minister met his Lebanese and Iraqi counterparts.

This year it focused on the future of the European Union and the major security and political challenges that the world is facing these days. The summit concluded on Sunday after the participation of more than 500 politicians and officials including 35 heads of state.