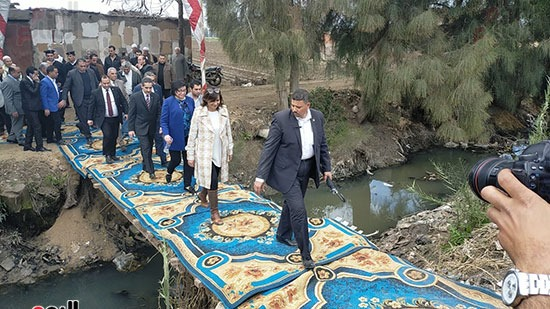 Minister of Immigration and Egyptian Expatriates Affairs Nabila Makram responded to criticism on social media over her photo when crossing a carpeted irrigation canal bridge in a village in Gharbia governorate.

In televised statements with Ten TV on Sunday, Makram said she only saw the “success and the efforts exerted during this visit.”

Makram added, “the residents of Mahalat Al Laban, Basioun” rolled out carpets on the canal bridge during the visit to “welcome the officials who were visiting the village for the first time.”

“Sadly, the only thing that attracts the public’s attention was the carpet … I would like to thank the people of the village for their hospitability.”

The photo of the minister went viral on social media and raised criticism over the carpeted bridge. Twitter and Facebook users, including residents of the village, criticised the government for not establishing an appropriate bridge over the canal to ease their daily activities instead of covering it with a carpet for the minister.

On the other hand, Markram said that she visited Fayoum, El Beheira, and Gharbia as part of her tour for the presidential initiative of “Survival Ships” which aims to raise awareness on the risks of illegal immigration.

The minister said that she focused during her visit on four productive villages in Gharbia. Representatives of the Central Bank of Egypt, the Social Fund for Development, and the National Council for Women accompanied Makram on the visit.

Makram emphasised that the visit was meant to support the crafts made in these villages. “The visit aimed to allow us to recognise these crafts, the challenges that face the residents, and how to support them,” the minister said.

Meanwhile, the ministry is working side by side with relevant bodies to set a work plan to develop the skills of those craftspeople to qualify them for the labour market inside and outside Egypt, Makram noted.