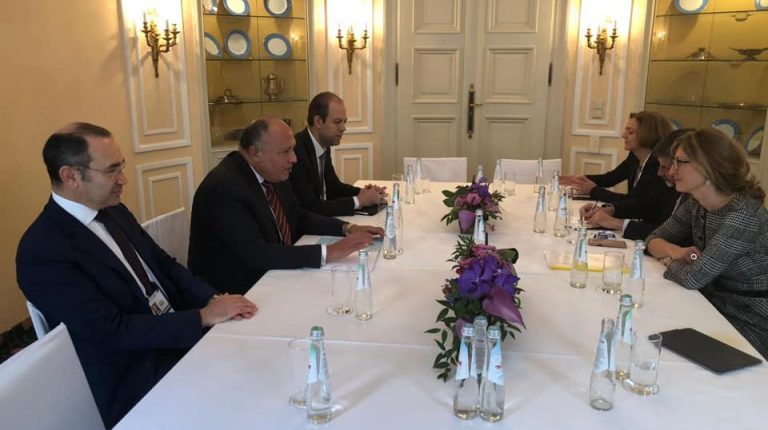 Minister of Foreign Affairs Sameh Shoukry has met with the British National Security Adviser, Mark Sedwill and discussed overall bilateral relations between Egypt and Britain, and consultations on issues of common concern.

The meeting came on the sidelines of the 56th Munich Security Conference. Shoukry also held bilateral meetings with Danish, Kuwaiti, and Lavtian counterparts.

Spokesperson for the Foreign Ministry Ahmed Hafez said that during the meeting, Shourky stressed the importance of developing cooperative relations with Britain in various fields.

He generally praised the positive developments witnessed in these relations during the past period, and expressed Egypt’s appreciation to Britain’s decision to resume direct flight traffic to Sharm El-Shaikh.

For his part, Sedwill presented the British Prime Minister to President Abdel Fattah Al-Sisi, expressing his country’s appreciation for Egypt’s efforts during the Africa-Britain Investment Summit held in January.

Hafez said that the two sides discussed ways to enhance political, security, economic, and tourism relations, and the importance of continuing efforts to address all common challenges, especially the continuation of existing cooperation to combat terrorism, and coordinate efforts to combat climate change.

The two sides reviewed other regional issues of common concern, as they exchanged views on ways to resolve the various crises in the Middle East, specifically views concerning the Libyan crises.

Shoukry started the meeting by congratulating his Kuwaiti counterpart on the assumption of the position of the Foreign Minister, expressing his wishes to the Kuwaiti Minister for success in his current mission.

Al-Sabah emphasised the deepening of the existing strategic relationship between Egypt and Kuwait and the historical and fraternal ties between the two countries.

Both ministers shared a fixed position regarding the Palestinian issue, and the two ministers also discussed the rapid developments taking place in the region, including the situation in Syria, and the continuing tensions on the Libyan scene, and agreed to reject regional interference in the affairs of Arab countries.

Shoukry said that he rejects threats facing the Arab Gulf states, and stressed the necessity not to allow these developments to negatively affect the security and stability of the Arab Gulf.

In his meeting with Denmark’s Foreign Minister Jeppe Kofod, Shoukry praised the continuous development witnessed in the two country’s bilateral relations in various fields, expressing appreciation for the level of coordination existing between the two countries to confront common challenges, including terrorism and illegal immigration.

During the meeting, both officials stressed the importance of developing existing cooperation in many areas, especially in the field of energy, and new and renewable energy.

During his turn, the Danish official praised the sustainable development strategy Egypt Vision 2030, while Shourkry reviewed the economic reform programme that the government has been implementing.

The Latvian Minister expressed his appreciation for Shoukry’s visit to Riga in October 2019, which is the first of its kind, expressing aspirations to enhance bilateral cooperation aspects.

Shoukry reviewed positive developments taking place in the Egyptian economy, expressing the aspiration for cooperation with Latvia in the field of investment and the transfer of expertise and technology.

The meeting covered consultations on regional and international issues of common concern, including efforts to combat terrorism and illegal immigration, as well as ways to resolve the multiple crises in the Middle East, especially in Libya.