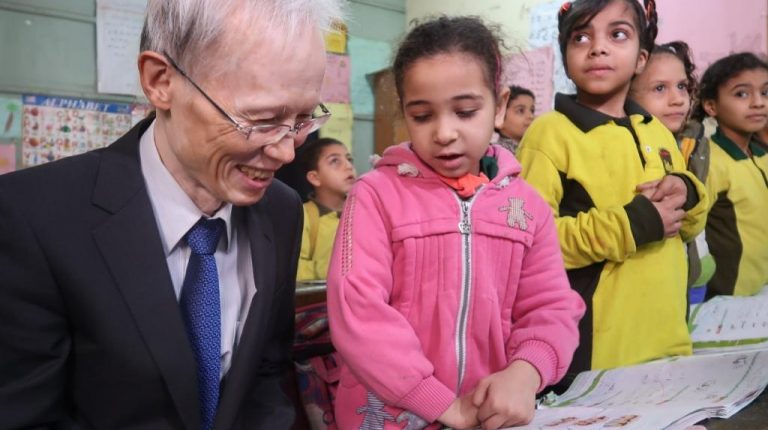 Japanese ambassador in Cairo Masaki Noke inked an agreement with Treasurer of Takatof Association for Development Ahmed Shawky to support the latter’s programmes that aim to improve Egypt’s educational environment for the kindergarten stage in two schools in Imbaba, Giza.

Upon the agreement, the Japanese government offers the Association $89,933 in grant to help in building new classes and develop educational buildings in Imbaba, a statement of the Japanese embassy said on Tuesday.

This is not the first cooperation between the Japanese embassy and the Association as they cooperated in 2016 and 2018 to boost Egypt’s primary schools in Beni Suef and Giza governorates which positively impacted the educational system.

The Japanese ambassador asserted the importance of education system in early childhood stage, noting that the kids develop their dedication, creativity and interacting skills over this stage.

This cooperation is part of the Japanese embassy’s financial assistance programme for development projects, known as “Grant Assistance for Grassroots Human Security Projects (GAGP)” which was designed to meet the socially diverse needs of this country in the fields of Public Welfare, Primary Education, Primary Health Care, Water and Environment, Agriculture since 1994.

The GAGP programme is known for flexible and timely support to development projects at the grassroots level. Given the recent development in Egypt, the government of Japan extended its assistance to meet the emerging needs from citizens in Egypt with a view to economic recovery, and social development of Egypt.