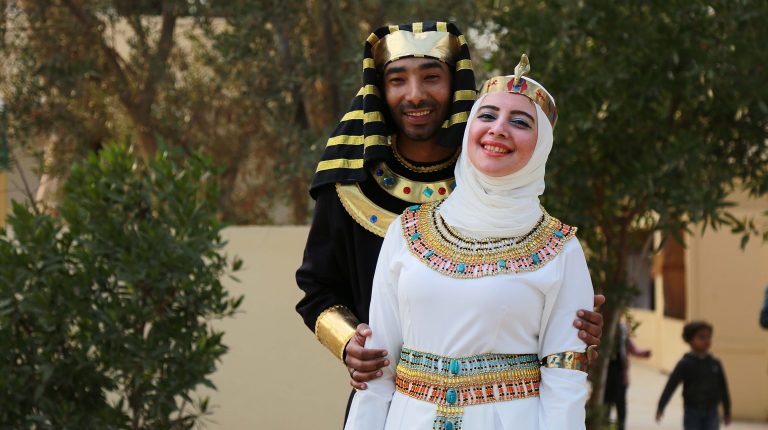 Marry like an ancient Egyptian? While the world celebrated Valentine’s Day last weekend with red roses and romantic dinners to the rhythms of love songs, an Egyptian couple broke the circle of traditional expression of love, tying the knot on the ceremony rituals of their ancient Egyptian ancestors.

The Pharaonic Village in Giza witnessed on Sunday the first-of-a-kind wedding on Pharaonic ceremony rituals. The wedding followed rituals of ancient Egyptians, reflecting their traditions and following the steps for announcing the marriage.

In front of a temple built inside the village, the couple walked down the aisle in a procession with dozens of followers that witnessed the marriage. A priest officiated the wedding.

The wedding was a part of the Pharaonic Village’s policy of raising people’s awareness of the social ceremonies and traditions of the ancient Egyptian civilisation. At the time, men used to get married between the age of 16 to 20, while women usually were married right after puberty. There was not much mentioned about wedding ceremonies in ancient Egypt, except in the New Kingdom.

During the Late Kingdom, it was chronicled that the marriage of upper classes witnessed inking a contract between the couple. The contract included their names, the name of the ruling Pharaoh at the time of the marriage, and the craft of the husband that is considered the family’s main breadwinner. At the end of contract, witnesses had to sign and mention the settlement they belong to.

Traditionally, at the wedding, the couple started their lives by displaying sacrifices to the Gods in front of the temple. The groom also gave presents to the bride’s father.

As for the middle class, it was known throughout the ancient Egyptian era that they held wedding ceremonies collectively.

The most famous recorded account of marriage in ancient Egypt is when Ramses II married a Hittite princess. The Hittite princess’s journey to Pi-Ramses was engraved on a large stela in the Great Temple at Abu Simbel. Which says “Thou commandest them … forever and ever, together with the whole land of Kheta [the Hittites]. While thou shinest upon the throne of Re, every land is under [thy] feet, forever.” The stela then recounts the journey undertaken by the princess and her retinue: “Then they [came] with [their] possessions, and [their] splendid [gifts] before them, of silver and gold … The great chiefs of every land came; they were bowed down, turning back in fear, when they saw [his majesty].”

All photos taken by Fadel Dawood