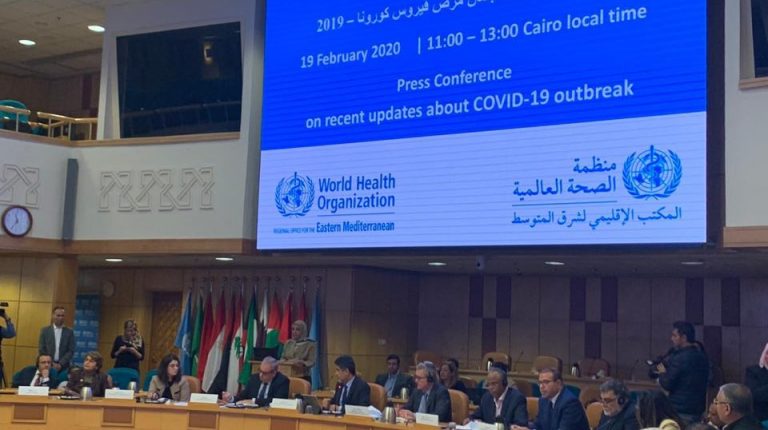 During a press conference, Bernnan said the organisation is working closely with factories, suppliers, and governments to insure the provision of treatment supplies are in order.

The WHO announced that about 22 countries in the Eastern Mediterranean region have the capacity to diagnose the disease with 16,000 trained workers.

However, there are two countries that are not able to do this, but they still can run medical tests and send samples to the WHO for results, said the WHO without identifying the countries.

Dalia Samhouri, Manager of Emergency Preparedness and IHR Programme Area Manager at WHO Eastern Mediterranean, told Daily News Egypt that “three out of nine cases in the Emirates have been cured and discharged from the quarantine,” confirming that, for now, there is no effective treatment for the virus, but current treatments are used to reduce the symptoms of the disease.

She clarified that once the infected person is cured, and that they are unable to transmit the virus to others, they will be discharged from quarantine.

Samhouri asserted there is no need to worry about infection from animals, as there are no cases of the virus being transmitted from humans to animals, and then back to humans. However, it is necessary to exercise caution as other Coronaviruses are able to spread via bats.

At the press conference, she explained that countries should require ports to have trained medical staff present and a health centre nearby equipped with detection. In case symptoms are present, the patient should be isolated from other passengers and be transferred to a hospital for examination.

If the patient is diagnosed with the virus, a list of names the passenger has come into contact with and their locations will be reviewed to determine who is at risk of infection, she added.

Amgad El-Kholy, a specialist in infectious hazard management in the WHO Eastern Mediterranean office, told DNE that in order to prove the recovery of patients infected with the virus, two medical tests are administered, but they must be a 24 hour separation to ensure that the patient has recovered and is unable to transmit the infection.

He added that each person gains immunity after infection, but for how long is yet to be determined. However, after recovery, the patient is unable to transmit the disease.

El-Kholy explained that there is no relationship between air temperature and the spread of the disease, but the main reason behind the virus spread is unhealthy habits, especially in the winter, when people keep all their windows closed and don’t pay attention to proper personal space between individuals.

However, he confirmed that there is no need to wear medical masks in crowded places.

The virus is weak to heat, so as long as food is properly cooked, there is no danger of infection, El-Kholy added.

Moreover, WHO representative in Egypt John Jabbour told DNE that by taking preventive measures, such as washing hands, using tissues for sneezing or coughing, and disposing them properly, will ensure that those who are recovered will not get sick again.

During the conference, Jabbour asserted that the organisation is working closely with the Egyptian government to achieve a clear plan for addressing the virus.

He added that Egypt is one of the first countries to enhance its surveillance system in order to face the virus.

He also announced that the only suspected COVID-19 case in Egypt tested negative, which means that he was not infected, but will remain in quarantine for the 14-day incubation period of the disease, conducting periodic check-ups to confirm his health status.

WHO Regional Director for Eastern Mediterranean Ahmed Al-Mandhari said, “the rumours of the COVID-19 created a disease even bigger than the disease itself.” He added that everyone is trying to provide information about the virus, even those who are not health professionals.