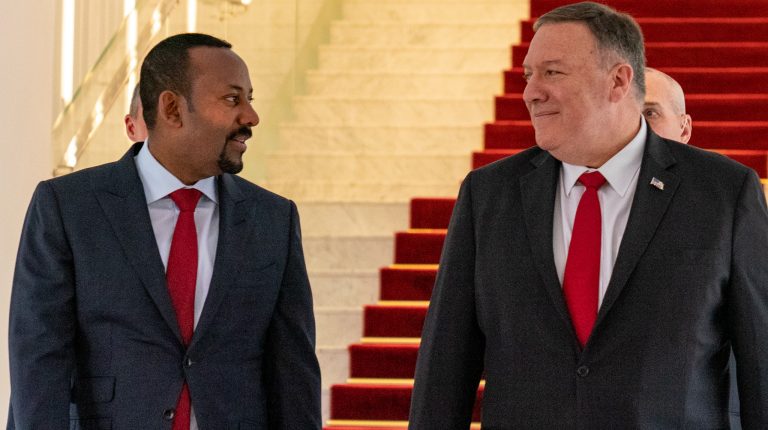 US Secretary of State Mike Pompeo has said that the dispute between Ethiopia and Egypt over the massive Grand Ethiopian Renaissance Dam (GERD) project on the Nile River “could take months”, but added that he is “optimistic” that the disagreement will be resolved.

“A great deal of work remains, but I’m optimistic that over the coming months we can resolve this,” he said during a press conference on Tuesday in Addis Ababa during his visit to the African country on 18 and 19 February.

A final agreement over the GERD between Egypt, Sudan, and Ethiopia is supposed to be reached by the end of February.

He said that he discussed with Ahmed “expanding the US-Ethiopia partnership.

“I emphasised the importance of free and fair elections in 2020 and our deep appreciation for Ethiopia’s leadership to ensure peace and stability in the Horn of Africa,” he added.

Ethiopia is the last stop on Pompeo’s tour of Africa, which included Senegal and Angola.

Last week, the ministers of Egypt, Ethiopia, and Sudan and their delegations met in Washington with the US Secretary of Treasury and the President of the World Bank -who are participating as observers- to continue negotiations on the filling and operation of the GERD.

The minister reviewed the progress achieved by their technical and legal teams and continued their discussions on the remaining issues necessary for a final agreement, according to a joint statement.

The US Department of Treasury and the World Bank will participate in drafting the final agreement to present to Egypt, Sudan, and Ethiopia during the upcoming days for signing scheduled for the end of February, Egyptian Foreign Ministry said following the meeting.

Egypt sought international meditation after talks with Ethiopia reached a “deadlock” in October 2019.

In November, Egypt, Ethiopia, and Sudan agreed to continue talks over the disputed GERD and to reach a deal by 15 January 2020, but no deal has been reached yet.

Egypt depends on the Nile for more than 70% of its water supply for drinking, industry, and agriculture, and is concerned that the GERD will imperil its share of Nile water and cause “harm” to its people.

The dispute between Egypt and Ethiopia is concentrated on the period of filling the GERD’s reservoir.

Ethiopia seeks to make the GERD, which costs $4.7bn, the largest hydropower project in Africa. The dam, of which 70% has already been established, is expected to generate more than 6,000MW of electricity by 2021.