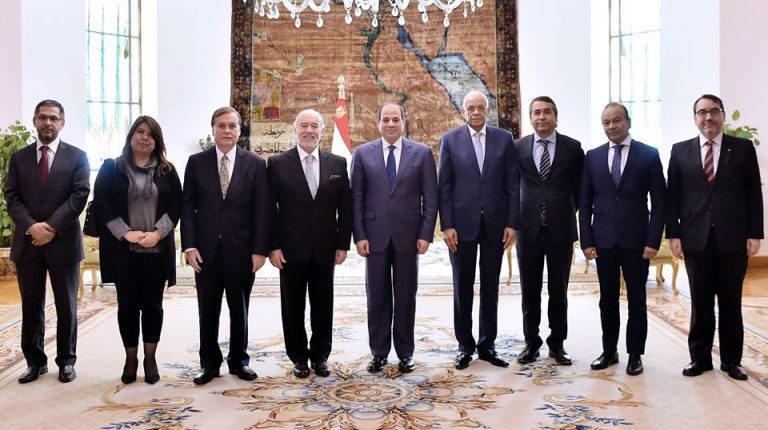 President Abdel Fattah Al-Sisi expressed Egypt’s aspiration to develop relations with Chile, during a meeting held Saturday with the President of Chamber of Deputies of Chile, Iván Flores.

Minister of Foreign Affairs Sameh Shoukry, and the speaker of the Egyptian House of Representative, Ali Abdel Aal, attended the meeting.

The two sides tackled ways to enhance cooperation between the two countries in various fields.

They discussed using Egypt’s position as a starting point to distribute Chilean products to Arab and African markets, benefiting from the free trade agreements that link Egypt with these regions, in addition to strengthening parliamentary cooperation in order to maximise these benefits.

During his meeting, Al-Sisi welcomed the Chilean parliamentary delegation, requesting Flores to convey his greetings to Chile’s president Sebastian Pinera. The president also hailed the historic relations between the two countries.

Flores praised Egypt’s progress in the past few years, achieving comprehensive development and its distinguished economic reform, as well as Egypt’s efforts to combat terrorism and extremist ideology.

He confirmed his appreciation for the two countries’ strong relations, which extends over a century, asserting the need to advance bilateral cooperation, especially in economic and commercial fields.

The two sides also affirmed their keenness in continuing coordination in international forums, especially over files of common concern, including the Palestinian issue, combating terrorism, and enhancing South-South coordination.

South-South cooperation aims at exchanging resources, technology, and knowledge between developing countries, also known as countries of the Global South.