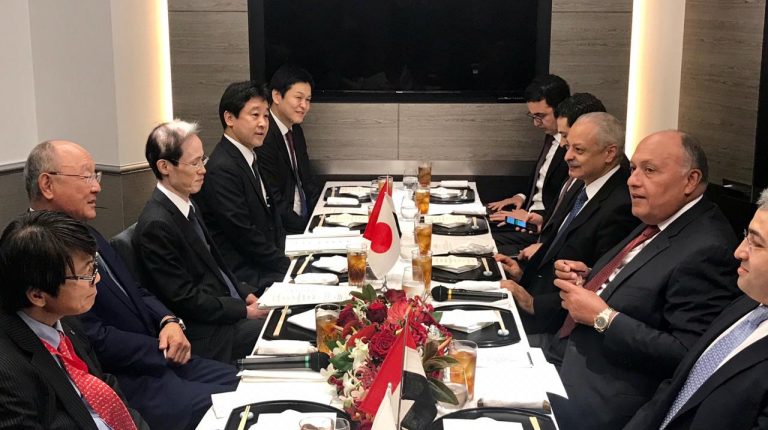 Japan considers Egypt as a very important country for the stability of the Middle East and Africa (MEA), said an official document on the political relations between Tokyo and Cairo, received by Daily News Egypt from the Japanese embassy to Cairo upon request.

Japan considers its bilateral relations with Egypt as a centre for its diplomacy in the MEA, in addition to be a model for joint bilateral action, the document added.

Japan and Egypt have long enjoyed friendly and close relations that date back to the 1860’s, when two missions from Japan visited Egypt and learned about its reformist experience.

Since that time, good relations have continued between the two countries in various political, economic, and cultural fields.

In recent years, these bilateral relations have developed through increasing political, economic, and cultural exchanges between the two countries. Both sides have also been making increasingly substantiated visits, as President Abdel Fattah Al-Sisi visited Japan in February 2016, after the Japanese Prime Minister Shinzo Abe visited Egypt in 2015.

One of the more important results of the visit was the announcement of the Japan-Egypt Joint Statement under the title: ‘Cooperation for the leap towards a new stage in bilateral relations,’ in addition to signing memoranda of understanding for the Egypt-Japan Education Partnership (E-JEP), as well as cooperation in energy, medical and health care, human and cultural exchanges, as well as sustainable and comprehensive economic and social development.

There is also a history of national and ministerial visits and exchanges as Ali Abdel-Aal, Speaker of the Egyptian Parliament, visited Japan with other MPs in May 2017.

Also, the Japanese Minister of Foreign Affairs, Taro Kono, visited Egypt to participate in the ministerial meeting of the first Japan-Arab Political Dialogue, as well as to hold bilateral meetings with Al-Sisi and Minister of Foreign Affairs Sameh Shoukry in September 2017. In addition to that, other visits were made by the Egyptian Chief of Staff and Pope Tawadros II in the same year to Japan.

It was an exceptional year in 2019 for the relations between the two countries, with Egypt taking over the chairpersonship of the African Union in January 2019, where Al-Sisi, after assuming the presidency of the Union, visited Japan twice in a single year representing the AU; the first time being in June 2019 to attend G20 Osaka summit, and the second was two months later, in August 2019, to attend the Seventh Tokyo International Conference on African Development (TICAD 7).

It is expected that the momentum of bilateral relations between Egypt and Japan will continue in the new imperial era of Japan (the Reiwa era), which began with Emperor Naruhito ascending to the throne last year. It is also expected that these relations would be expanded towards wider horizons, especially with the opening of the two countries’ landmark cooperation in the Grand Egyptian Museum project by the end of this year.