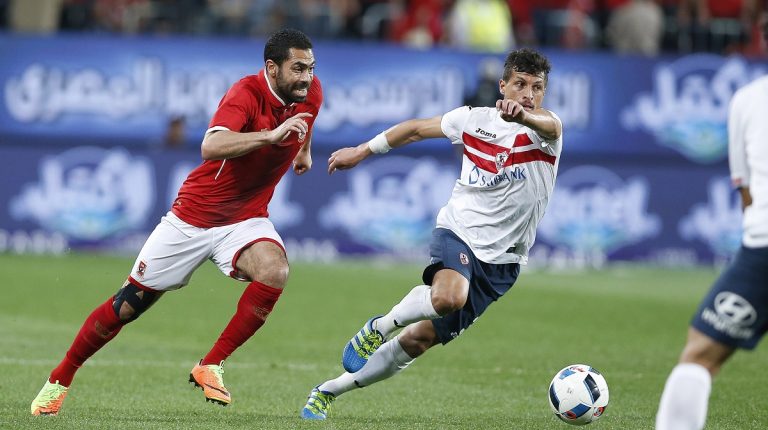 The two most successful clubs arguably in Egypt and Africa, Al Ahly and Zamalek, will clash on Monday for the second time in less than 96 hours after Egypt Super Cup held on Thursday in the UAE. This will be one of the few times that two major rivals meet twice in less than a week.

The Egyptian Football Association’s (EFA) normalisation committee, headed by Amr El-Ganainy, had postponed the game last October which was in the fourth round of the Egyptian Premier League, as Egypt hosted the U23 Africa Cup of Nations at the time.

Tonight’s match follows the unfortunate events of the Super Cup match between the players of both teams, after Zamalek won the title, which sparked angry reactions among fans. Both teams will have a big responsibility to contain that anger.

It was Al Ahly’s first title loss under Swiss coach Rene Weiler, although the Red Devils now lead the league table with 45 points from 14 consecutive victories. Al Ahly are a few steps away from their fifth league title in a row and the 42nd in history.

On the other side, Zamalek are in euphoria after landing two precious titles in a few days, the CAF Super Cup and the Egypt Super Cup, even though the team are struggling in the local league and have only collected 31 points from 15 matches, coming in third.

Al Ahly are enamoured with seeking revenge to reconcile with their fans and win their 16th game in a row to match their legendary record with the Portuguese coach Manuel Jose. Cairo Derby also comes days before Al Ahly’s string clash with Mamelodi Sundowns of South Africa in the quarter-finals of the CAF Champions League.

Al Ahly and Zamalek started immediately their preparations for the derby, especially as there was not enough rest after the Super Cup game. Therefore, there was controversy among fans about the possibility of postponing the match, but the EFA ruled to play it on time.

Al Ahly squad is expected to include Mohamed El Shennawy as goalkeeper; Rami Rabia, Yasser Ibrahim, or Ayman Ashraf as defenders; and Ahmed Fathi as right-back instead of Mohamed Hani, who played the Super Cup; and Ali Maaloul as left-back.

In the midfield, there will be Aliou Dieng, Amr El Solia, Mohamed Magdy (Afsha), or Walid Soliman. Hussein El Shahat, Geraldo, and Marwan Mohsen will play as forwards. Al Ahly’s star Ramadan Sobhi may return, having recovered from his injury.

As for Zamalek, they are expected to play with the same squad of Supr Cup: Mohamed Abu Gabal as goalkeeper; Mahmoud Hamdy El Wensh, Mahmoud Alaa, Hazem Emam, and Mohamed Abdel Shafy as defenders. In the midfield, fans should expect Tarek Hamed, Ferjani Sassi, and Achraf Bencharki, while Ahmed Sayed Ziziou, Youssef Obama, and Mostafa Mohamed will play as forwards.

Weiler on mission to correct path

Al-Ahly’s coach Weiler realises that he is facing a real test on Monday, after losing to Zamalek in the Super Cup.

Despite the 15 successive wins in the league and topping the table with 45 points, any derby match is of special importance, which puts the man under a lot pressure.

Winning would restore confidence for Al Ahly before they face South Africa’s Sundowns in the first leg of the CAF Champions League’s quarter-finals.

However, Carteron will be playing without pressures, due to the wide gap between the two teams in the league table, as Al Ahly top the league with 45 points and Zamalek come third with 31 points.

Of Course, Carteron hopes to achieve his second victory over Al Ahly in less than a week, which will be something to mark in his legacy.

Carteon has won the confidence of the Zamalek’s administration after winning both the CAF Super Cup and the Egypt Super Cup. He will now focus on the CAF Champions League, in which Zamalek are set to face Espérance Sportive de Tunis in the first leg of the quarter-finals.

Tunisian left-back Ali Maaloul of Al Ahly remains one of the most important players for the technical staff on whom it relies, given his special capabilities.

Maaloul has made the difference for Al Ahly over the years, and the club’s fans are hopeful that the 30-year-old international will lead the team to their fifth consecutive league title.

With his special foot work and speed, Maaloul could lead the Red Devils to victory in difficult matches, especially after showing good defence capabilities in the Super Cup last Thursday.

The second player that Al Ahly might use in the Monday game is Ramadan Sobhi, the most expensive player in Al Ahly now.

Sobhi has missed several games due to injury, but he recovered recently and seems ready to play against Zamalek.

Zamalek’s two young stars Kabongo Kasongo and Mostafa Fathi are expected to shine against Al Ahly on Monday as they did not play the Super Cup so they will be more fit than their teammates. The duo’s participation in Al Ahly game will be important also as it’s a preparation for the upcoming clash against the Espérance Sportive de Tunis on 28 February in the first leg of the CAF Champions League quarter-finals.

As for Kasongo, the DR Congolese hopes to start the Monday game and prove himself before the technical staff and fans. Kasongo knows that he would have a few chances to show his capabilities being accompanied with two brilliant strikers, Mostafa Mohamed and Achraf Bencharki.