The growth of external demand on frozen vegetables and fruits stimulated manufacturers in Egypt to expand their operating investments starting this year. This would be through adding new production lines to their factories or setting up entirely new factories to cover the growing demand.

Abdel Wahed Soliman, the chairperson of the British Egyptian Company for General Development, said that the increasing demand for frozen vegetable and fruit products motivated the company to expand in the construction of new factories. This expansion started in 2014, bringing total investments to EGP 500m.

The company had pumped EGP 112m in investments last year to establish the fourth factory, and it is scheduled to open next June, with a production capacity of 10,000 tonnes annually. This factory’s entire production will be allocated for export.

According to data from the Food Export Council, exports of frozen vegetables jumped 20% last year, to reach $120m, compared to $100m in the previous year.

He explained that the new factory will raise the production capacity of the company’s frozen vegetables and fruits to 80,000 tonnes annually, compared to 70,000 tonnes currently, relying on the latest machines similar to those in the US and Europe. 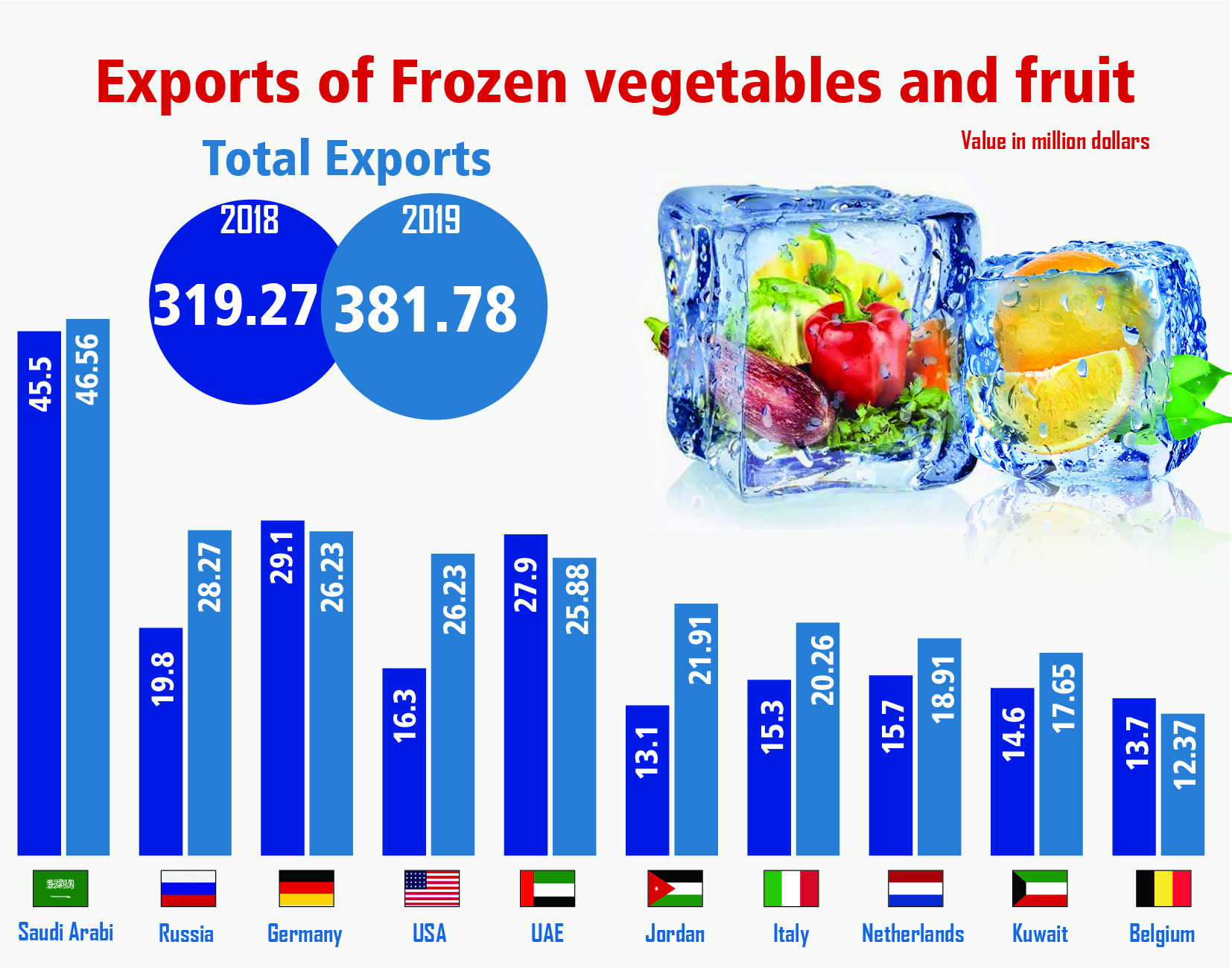 Mohamed El Desouky, the chairperson of EGCT for Agricultural Products, added that he invested in the frozen fruits and vegetables sector by establishing a new factory and allocating its entire production for export. This is due to the growing demand for Egyptian products in this category.

He added that the company seeks to take advantage of the increased demand for frozen vegetables and fruits due to its high demand in European and Gulf markets. The company produces a variety of products including beans, artichoke, broccoli, strawberry, and others.

The company aims to raise its exports of frozen vegetables and fruits to reach $10m this year, compared to $2m last year. This year, the company will be the company’s first to rely on factories to meet exportation demand.

The production capacity of the factory reaches 80 tonnes per day, and it aims to expand mainly in Russia, southern Europe, and Japan. It is also looking for new customers in other diverse markets.

“We are seeking to establish a factory specialising in frozen vegetables with a production capacity of 20,000 tonnes per year,” said Mohamed El-Nashar, former general manager of Partners traders “Frosty Foods”.

The establishment of the new factory will give the company a greater opportunity to expand and raise the quality of its products and reduce its cost. This would raise competitiveness in foreign and domestic markets.

“Last year witnessed an increase in the volume of demand for the company’s products, especially frozen artichoke, supported by a decline in the size of the crop in the European market, due to climate changes,” he added.

Sherif El Beltagy, president of Belco for exportation of crops, said that the company seeks to increase its exports of frozen vegetables annually, and pumped investments last year to expand production lines and increase capacities to cover the growing demand.

Al-Beltagy explained that Egypt’s frozen vegetables products have a competitive advantage through quality, which relies on organic cultivation, and that demand is currently growing, especially in the European Union.

The importance of expansion in new markets, which will provide Egyptian products with greater opportunities, adding that the diversity of markets protects Egyptian investments from stopping or retreating in the case of declining demand, he concluded.