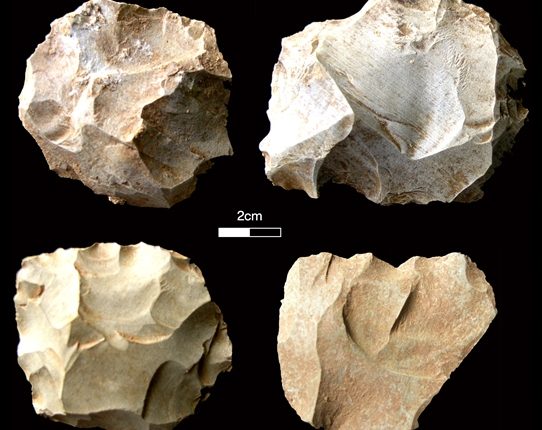 About 74,000 years ago, a super-eruption, resulting in one of the largest volcanic events to occur the last two million years, on the island of Sumatra, Indonesia caused massive destruction in southeast Asia. The Toba super-eruption was about 5,000 times larger than that of Mount St. Helen’s in the 1980s.

For centuries, the eruption was thought to have caused a volcanic winter lasting six to ten years leading to a 1,000 year-long cooling of the Earth’s surface, which drastically reduced human population. This reduction caused a ‘bottleneck’ and necessitated new cultural innovations that helped them survive and later spread out of Africa. It has also resulted in darkened conditions and a decline in plants and animals.

Theories purported that the volcanic eruption would have led to major catastrophes, including the decimation of hominin populations and mammal populations in Asia, and the near extinction of our own species.

The few surviving Homo sapiens in Africa were said to have survived by developing sophisticated social, symbolic, and economic strategies that enabled them to eventually re-expand and populate Asia 60,000 years ago in a single, rapid wave along the Indian Ocean coastline.

In a new study published on Tuesday in Nature Communications, a multidisciplinary team, led by the University of Queensland, Australia and Max Planck Institute for the Science of Human History, suggested that modern human occupation of northern India spanned the Mount Toba super-eruption.

The paper reports the discovery of stone tools from a site in the Son River Valley, which indicates that it has been continuously occupied over the last 80,000 years. The findings provide insights into the eastward dispersal of our species out of Africa.

Scientists have discovered a site in northern India called Dhaba which contains evidence of human occupation spanning the Toba super-eruption. They have also found that the stone tools at the site were the same before and after the eruption, indicating very little change at all. The stone tools dating to 80,000 years ago closely resemble the kinds of artefact made by modern humans in Africa, Arabia at the time and those also made in Australia about 65,000 years ago.

There was no major cultural change in stone tool manufacture until about 74,000 years ago, indicating that hunter-gatherers living beside the Son River survived and even thrived after the eruption, according to the paper.

Chris Clarkson from the University of Queensland, lead author of the study, told Daily News Egypt that the results of the study are important because they tell us that small hunter-gatherer bands could be very resilient in the face of climate change and natural catastrophes. It also tells us that impact of the Toba eruption was perhaps less than originally thought.

Furthermore, the similarity of the stone tools at the site to those in Africa indicates these were likely modern humans living at the site, placing them in India much earlier than commonly thought.

According to the lead author, the team have carried out large excavations at the site in three places and dated the site’s various layers and analysed stone tools in each layer. “We used Infrared Stimulated Luminescence dating which is a kind of luminescence dating that measures energy trapped in mineral grains. By measuring the amount of energy built up in the grains since last exposure to sunlight it was possible to determine how old each layer of the site is,” he explained.

He further noted that he and his team were amazed to find stone tools so similar to those being made in Africa, the Levant, Arabia and even Australia so early on. This seems to be consistent with fossil evidence that modern humans were out of Africa 200,000 years ago, were residing in India and China 80,000 year ago and had made their way to Australia 65,000 years ago.

“Sites like Dhaba have the capacity to change everything we thought we knew about human evolution and we look forward to finding more like them,” Clarkson added.