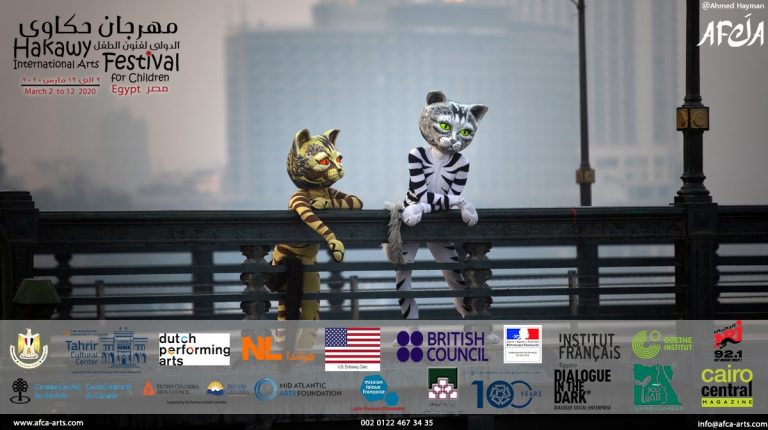 While small and colourful puppets move on stage from one place to another, reciting lines about ethics, morals, and decency in an entertaining catchy way, they create what is more than just a puppet play to the attending children; in fact, they portray a fantasy world in which children can imagine they live in and learn of stories that touch their souls.

Under this belief, the 10th Hakawy International Arts Festival for Children kicks off on 3 March, bringing puppet shows from all over the world. The annual children festival presents various types of theatre arts, such as puppetry and musical theatre, as well as modern dance, all dedicated to children of all ages.

The ten-day festival is brought to audiences by the AFCA Foundation for Arts and Culture, an independent entertainment organisation targeting teens and children in Egypt. This year’s edition witnesses a collaboration with the Dutch Embassy in Cairo that supports the festival with four Dutch performances including one premiere.

“The 10th edition of Hakawy festival provides a platform for the Egyptian theatre practitioners to present their work and support our core mission, which is not to be limited to importing art, but also to serve as a creative exporter of Egyptian theatre talents, performances, and the many values that they carry. It is a long term investment for sure. It is all a big net for the creative economy that the AFCA Arts Centre and Hakawy contribute to and which has a direct impact on many sectors of the country,” Mohamed El Ghawy, Founder and Artistic Director of Hakawy festival said.

He added that the festival showcases seven Egyptian performances including four show premieres of established theatre artists, which gives us an opportunity to present local productions to international delegates, programmers, and festival managers.

The festival will also feature 11 international shows from the USA, UK, France, Germany, and Canada. This comes as a side programme of special projects, master-classes, workshops, and talks led by Egyptian and international artists across thirteen venues.

The Dutch performances include four acclaimed productions, including Farewell by Malou van Sluis, an imaginative play about feeling desires, and having to miss them; and Hermit by Simone de Jong, a physical theatre story featuring a visual, original performance about a mini house.

Not only will Hakawy’s 10th anniversary offer a diverse and creative experience to young audiences, but also, it’s a chance given for numerous practitioners of children theatre to present their works to young audiences, their families, and the many international theatre and festivals’ directors attending the festival.