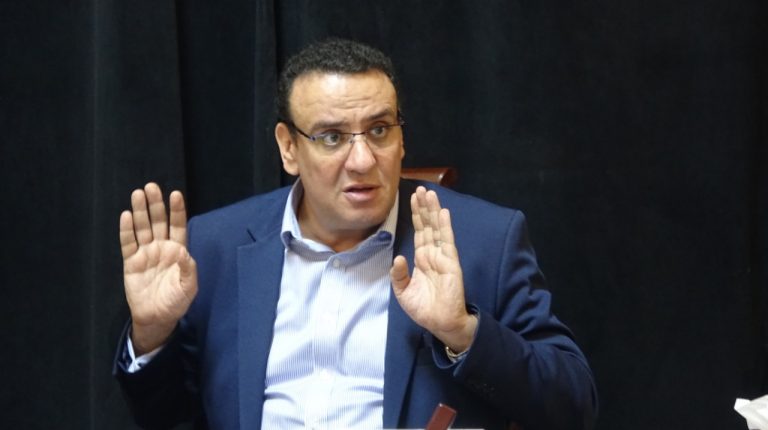 Despite criticisms against the Egyptian parliament, the clear fact is that this parliament has accomplished twice as much as what has been accomplished in the previous two assemblies combined. This is how Salah Hasaballah, a member of the House of Representatives and an official parliamentary spokesperson, said, noting that parliament has worked on files which have been deferred by previous MPs, such as the new health insurance and the demarcation of maritime borders that enabled Egypt to take advantage of its wealth that was wasted in the Mediterranean. He described parliament’s supervision over the government as a “rational supervision.”

Are there ongoing investigations into the death of MP Hassan El Gendy?

The investigations are ongoing at the highest level, and not only from security services, but also from local council bodies responsible for building licences. The real problem, however, is the contractors who seek the cheapest options.

Does this incident highlight localities and building permits?

It more accurately highlights the corruption problem in localities. There is a set of control tools in Parliament that will be activated in the coming period to monitor these licences.

Why is the local councils law delayed?

At parliament’s first session, the law of localities was out priority since everyone understood the necessity of localities’ presence. MPs had many aids lined up for local council roles for the community. And more importantly it would have given MPs more breathing room to focus on legislation and supervision.

There were many bills submitted by many parties. The committee studied all the bills and issued a unified draft that will soon be discussed.

Is there conflict in the law’s provisions among MPs?

There are two opinions in parliament, one sees that the community has changed and the local councils must cope with this change, while others are pushing for the election law.

We believe there is no problem with separating the local administration law from the election law, as there are 161 articles in the localities law and only 14 in the electoral law. The electoral law can be issued quickly to hold elections.

What are the new standards in the localities law?

We are trying to apply what we have sought after for some time now, which is decentralisation. The second point is to increase the governor’s jurisdictions to give them more freedom instead of relying on ministers. The new law provides for a safe and smooth shift from a centralised government to a decentralised one.

Why do we lack investment goals for each governorate?

That’s due to shaky hands in many governorates. If you go to a governorate to establish an investment project, and you need land, the governor may be worried about corruption charges, so they would defer. Laws do not protect employees, which is why we are considering the revision of some articles to give officials more power to make decisions, which would activate development plans.

Does the new law activate the economic region concept?

There are articles in the new law related to maximising the utilisation of the governorate’s resources, as what has happened in the land issue, and we suggested that the governorates have a share of the law enforcement outcome, which would benefit the governorate. We also did this in the reconciliation law.

Regarding the Reconciliation Law on Buildings and Residential Units, what did its application come to be?

Some of the employees entrusted with the application of this law misunderstood it. They thought that reconciliation meant the entire building, and not each separate housing unit. We discovered this after nine months of its application. We knew when we were legislating that many buildings receives permits in the name of a deceased, immigrant, or anonymous person to avoid liability, so it was important to reconcile with residents.

When will parliamentary elections be held?

The tenure of the current parliament is five years and will end on 9 January 2021. Elections must be held 60 days prior to that date, which would be in November.

What about local councils and the Shura council?

This would rely on the issuance of the Shura council and local councils’ electoral laws.

Are there any changes in parliament’s elections next year?

This is likely. Some MPs are discussing the ratio between individual and list seats and we believe in activating a balance of 50/50.

How do you see the political reform?

There cannot be a strong regime without a strong political system. I stand against criticising parties as most of them were born after 2011. An infant party would require assistance. We should give them time let the number fall to only five or six parties.

Is it possible to return to President Sadat’s view of right-wing, centrists, and youth?

This is difficult because ideas have changed. There is no more socialism now.

How do you see the file of Human Rights, given international criticism?

These statements are always linked to funding. In one of the meetings with the US congress, they named someone who allegedly disappeared. We provided them with a video of him in the Sinai supporting ISIS. Many of these statements are nothing but paid advertisements. The Egyptian state stands clear: we have nothing to hide, but we believe that national security is a top priority since it is connected to our right to live. How can we not apply the emergency law on terrorists in Sinai?

We stand with human rights, but in a wider view.

Why don’t we respond to these allegations?

Becuase we don’t have time for small talk. We have more important tasks. In Turkey, there are thousands of detainees. The Turkish president arrested half of the armed forces and journalists, but we don’t have time to intervene in other countries’ business.

How do you evaluate the performance of the current government?

Were you against appointing an economic figure as prime minister?

I believe it’s for the best to have a deputy prime minister for economic affairs. But I also know there was something behind the scenes, which both you and me could not possibly know. I, however, look very positively at including the government’s investment portfolio to the prime minister’s list of tasks, which has removed many investment obstacles.

With the success of the economic reform, when will the real reform take place in industrial and agricultural development?

This is really important, but we must pay attention to what is happening. We are reviving the textile industry, for example. Many feeding industries will open many sectors. Reviving industries and compensating for years lost requires effort and time. You should only worry when there is no will.

How do you evaluate investment encouragement measures?

We have made amendments to the investment law and draft laws protecting investment, such as the law of protective reconciliation, and to distinguish between a serious investor and a non-serious one, and there is a law facilitating the procedures of industrial establishments. It is even more important to impose these laws, since we are building a state, which would take years.

Are there economic legislations expected to be enacted in the coming period?

I don’t think so. We have issued many legislations that have been praised by all, and we are awaiting implementation and outcome.

Are you satisfied with the size and impact of the Egyptian parliament worldwide?

What about some citizens’ negative opinion about Parliament?

The parliament’s mission is to push the state through legislation, and oversee its performance. Citizens have for long thought that parliament should only offer services.