In Sudan, dozens of youth formed three groups wearing three different colour outfits, blue, white, and yellow. The blue and white groups went in intersection lines and the yellow one met them in the middle, representing the convergence of White and Blue Nile Rivers in Sudan to form the Nile flow to Egypt.  The show meant to celebrate the 14th Nile Day.

The Nile Day commemorates the establishment of the Nile Basin Initiative (NBI), and is celebrated annually on 22 February across the Nile Basin countries. It marks a major milestone in international relations and represents the first real cooperation between the NBI members. These countries are now able to come together and collectively take care and share the waters of the Nile, bringing about the equitable and shared enjoyment for generations to come.

This year’s celebration came under the theme of “Joint Investments on the Nile for Regional Transformation”. This is the second time Sudan hosted this event, the first was in 2015. The first Nile Day celebration was in 2007 in Kigali, Rwanda.

The Nile Day was organised in partnership between the Sudanese Youth Parliament for Water (SYPW) and Environment Conservation Society.

The marches started from the Sudan National Museum and Corinthia Hotel Khartoum on the meeting point of the Blue Nile and White Nile to the Friendship Hall where the main celebration was held. The walk took around 10 minutes, accompanied with a military band and African music bands. Some children joined the marches holding balloons.

African dancers performed on folk music in the presence of Nile Basin countries’ ministers of water and foreign affairs as well as ambassadors.

The celebration included official speeches, open-air and indoor arts and sports events, besides the main conference.

Sudan’s Water and Irrigation Minister Yasir Abbas delivered the opening speech. He said his ministry counted on the conference outputs in planning the future of drinking water and irrigation projects in the Nile Basin.

“The water sector had suffered quite a lot under the former regime and it is now our responsibility to put a national water plan in collaboration with our partners in the water sector,” said Abbas. 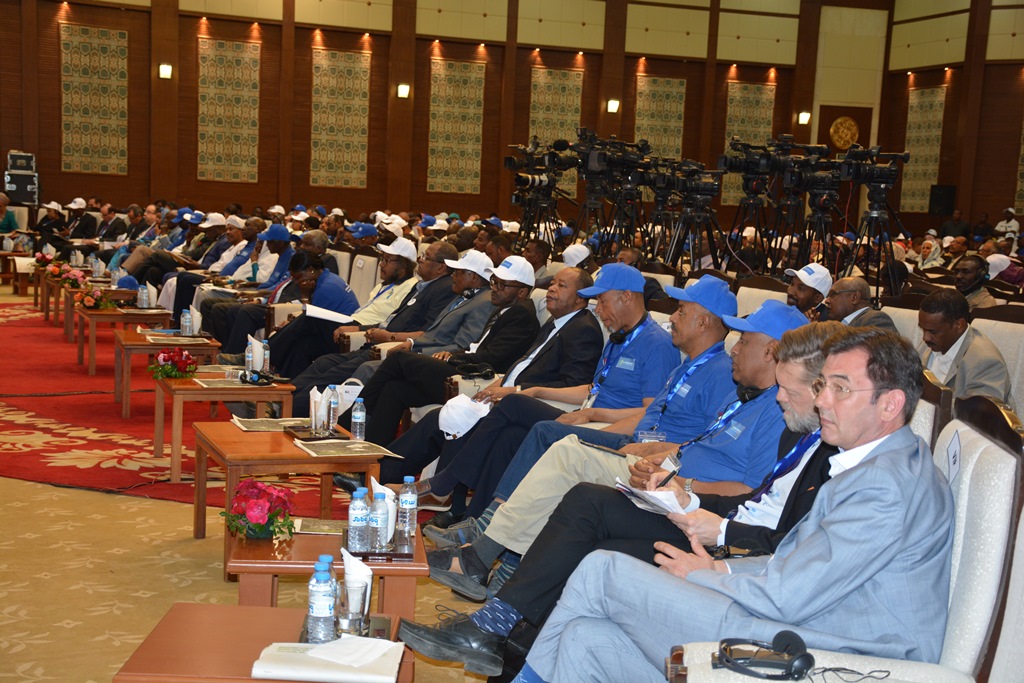 Moreover, Sudan’s Minister of Foreign Affairs Asma Mohamad Abdalla said, “The event’s theme ‘Joint Investments on the Nile for Regional Transformation’ is one of the key elements that needs to be in place in order to achieve sustainable development goal no. 6 on clean water and sanitation.”

She added that without joint planning and investment, Nile Basin countries will miss out on opportunities of development, which benefit the Nile Basin people. She called upon development partners and the private sector to support the NBI in its efforts to realise regional investments.

Executive Director of NBI Secretariat Seifeldin Hamad Abdalla said the key objective of the event is to highlight some of the achievements made in terms of investment, with emphasising the need to accelerate implementation of the NBI-prepared investment projects, which are worth more than $6.5bn. These projects would support NBI member states in their quest to meet the growing demand for water, food, and energy.

Aside from celebrating the achievements of NBI, the Nile Day provides an opportunity for various stakeholders to celebrate the region’s cultures, arts, and traditional cuisines.

Meanwhile, UNICEF Representative Abdullah Fadl urged for “strong and effective cooperation between the partners and the Irrigation Ministry.” He also voiced the UNICEF’s “complete support to the Conference outputs.”

Deputy Director of the Water Resources Technical Organ in Sudan Hassan Abulbashar appreciated the participation of the NBI representatives in Sudan’s celebrations of the Nile Day.

He noted that 84 investment projects were launched by the initiative. They seek to boost food security, energy and water resources at an estimated total cost of $6.5bn. “The new Sudan is open towards regional cooperation and looks forward to gaining from these projects,” he added.

Abulbashar said some scientific means were also devised within the initiative. These means will be promoted in a manner that helps take decisions on the utilisation of common water resources.

The Nile Basin is one of the Globe’s strategic areas. It overlooks important waterways: the Mediterranean, the Suez Canal, the Red Sea, and the Indian Ocean. In addition, the Basin overlooks the banks of the River’s many tributaries and mainstreams. This permits the creation of hydroelectric and industrial projects. The area is also rich in underground and surface waters.

In addition, the region receives a lot of rainfall, which in addition, can help exploit vast expanses of fertile land for agriculture. The area is also endowed with a lot of livestock and fish resources.

However, the Nile Basin countries are facing spates of droughts and environment hazards that dictate upon them the need to work together and maintain the existing water agreements and advance them further.

They are also required to control pollution on the river banks to prevent waterborne diseases. 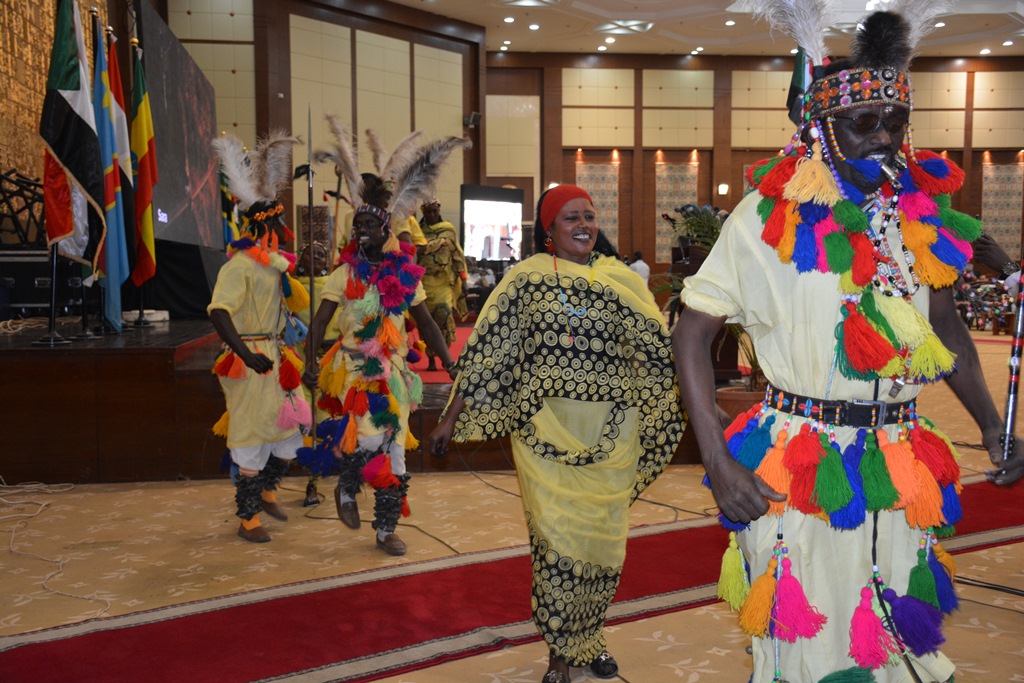 Speaking about the role of youth, Mohamed Awad, SYPW representative, told Daily News Egypt that “today is an important event, and our presence is important because we are the future. Youth should be involved in all events related to water because one day we will be the decision makers.”

Regarding the water situation in Sudan, Awad said the future of water in Sudan is not good or bad, the situation is neutral, and the only concern is how this topic will be managed in the future.

“We as parliament want to have a role in all what is happening regarding water affairs in the country,’ he said noting that the situation of the water parliament is better now than before the Sudanese revolution as they suffered to obtain a license, but now the procedure is going on to be official.

“We have committees across the country. We have launched several projects since 2017, those related to awareness of the importance of water and how people can rationalise consumption. We also have educational projects, and other more about investigation as we go to visit some cities in Sudan to conduct surveys on water and health condition in surrounding areas, Awad added.

Elham Ahmed, SYPW executive manager, said: “We are members of the organising committee,” this is the first time, we were able to attend the Nile Day as an organiser, and this happened thanks to the decision of the minister of water and irrigation.

“We organised an expo where youth presented their handmade works inspired by African culture. The ceremony organisation was voluntary,” she added.

On the sidelines of the Nile Day, the NBI organised media training for journalists from Egypt, Ethiopia, Sudan, and South Sudan from 18 to 21 February on the security and management of dams.

The NBI was established on 22 February 1999 by ministers of water affairs in the Nile Basin countries. The NBI is the only basin-wide institution mandated to facilitate the cooperative development and management of the shared Nile Basin water resources on behalf of the 10-member states, for win-win benefits and to promote regional peace and security.

The setup of NBI is comprised of the NBI Secretariat based in Entebbe, Uganda, and two Subsidiary Action Programmes Offices leveraging unique sub-basin potentials and mitigating unique sub-basin risks. There are also the Eastern Nile Technical Regional Office based in Addis Ababa, Ethiopia for the Eastern Nile sub-basin and the Nile Equatorial Lakes Subsidiary Action Programme Coordination Unit based in Kigali, Rwanda for the Nile Equatorial Lakes sub-basin.