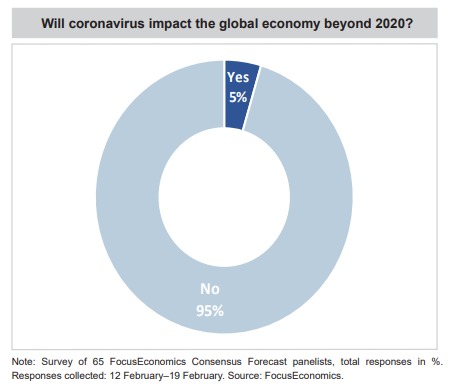 FocusEconomics panellists expect coronavirus will significantly hit China’s GDP growth this year, notwithstanding government stimulus, according to its Coronavirus Survey in February.

Almost half the panellists surveyed believe the virus to subtract 0.5-0.8 percentage points from Chinese growth.

“The impact on the global economy should be milder. Most panellists see a 0.0–0.2 percentage-point reduction in global growth, with the impact likely concentrated in first half (1H) of the year. However, risks are skewed to the downside, and the impact could well be larger if the spread of the virus outside China continues,” the report read. “There is still a notable divergence in panellists’ views, reflecting the inherent difficulties in forecasting the duration and extent of the epidemic.”

Panellists judged that South-East Asian countries would suffer the largest economic fallout, due to close economic ties with China and geographical proximity increasing the risk of contagion. For this reason, Japan is likely to be the G7 nation hardest hit by the epidemic. However, the recent outbreak in Italy raises the risk of a larger economic impact there and a spread to neighbouring European countries.

The vast majority of panellists do not see the economic impact of coronavirus persisting beyond 2020, the report highlighted.

Xu Xiao Chun, economist at Moody’s Analytics, said, “The global economy will feel the ill effects from China’s economic problems through three principal channels. Chinese tourism and business travel to the rest of the world has already stopped. Major tourism destinations across the globe are feeling the effects, although they are most pronounced throughout Asia. Second, the global manufacturing supply chain is disrupted, as China is at the end of many of those chains.”

Chun added that Southeast Asia is especially vulnerable to this disruption, although manufacturers throughout the world, including in the US and Europe, will be affected. Shortages of some goods will likely result this spring.

Additionally, emerging markets, particularly in Latin America and Africa, will also soon feel the ill-effects of the slump in commodity markets, since China will purchase less oil, copper, soybeans, and other commodities, he disclosed.

Analysts at TD Economics noted that companies have also looked to continue production by bypassing China, saying, “The longer China takes to contain the virus, the more likely it is that manufacturers will explore other locations.”

Meanwhile, Luis Suzigan, senior advisor at LCA Consultores projected that economic activity in China is expected to stabilise in second quarter (2Q) of 2020 and start to recover in 3Q20.

Suzigan further said that the negative impact on services will not be fully recovered, but most of the negative impact in manufacturing is expected to be compensated ahead, as industries will seek to intensify the pace of production later on to compensate for the period in which the activity was reduced or interrupted.”

Sophie Altermatt, an economic researcher at Julius Baer, believes that the impact on global growth will mimic the pattern of the impact on Chinese economic activity – although to a softer degree. We expect the global economy to grow at a rate of 2.8% in 2020, which is a downward revision of 0.2 percentage points to our original 2020 forecast.

Meanwhile, economists at Goldman Sachs said, “Despite a negligible hit to aggregate US activity from supply chain production disruptions under our baseline scenario, we have nevertheless increased our estimated growth drag from the coronavirus given the slower than expected pickup in Chinese activity and travel. We now estimate a 0.8pp growth drag in 1Q (from 0.5-0.6pp previously), with positive growth effects of about 0.3pp in 2Q, 0.3-0.4pp in 3Q, and 0.1pp in 4Q as activity normalises.”

Daniel Richards, senior MENA economist at Emirates NBD, stated, “While the coronavirus is presenting a significant threat to 1Q growth, much of the impact will be short lived, and some pent-up demand and backlogs should see a comparatively strong rebound in its wake, prompting a v-shaped recovery, as seen in 2003.”