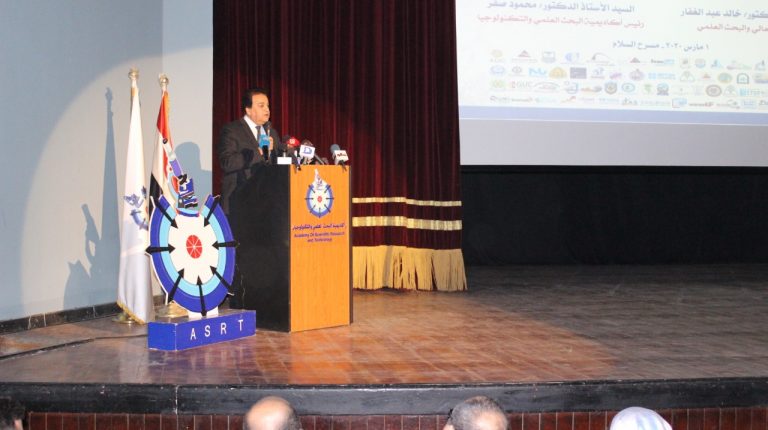 In his speech on opening day, Abdel Ghaffar stressed the importance of holding Egyptian Science Month, within the framework of Egypt’s vision towards sustainable development 2030, in spreading science, technology and innovation.

He noted that the world has changed a lot and currently provides technological means that help to simplify science, such as the simulation laboratories. He indicated that universities participate in the activities of Egyptian Science Month in cooperation with the Academy of Scientific Research and Technology, according to the educational agenda that includes several cultural and educational activities.

For his part, Mahmoud Sakr, the president of the Academy of Scientific Research and Technology pointed out that the academy has been organising the month since 2014, in cooperation with public and private universities, public libraries, NGOs, private companies, research institutions, and civil society organisations. Additionally, youth and student initiatives that are  concerned with simplifying science and education are also parties in this year’s edition.

Sakr explained Egyptian Science Month 2020 includes more than 1,500 activities in scientific culture, innovation, and creative education of science in all governorates. More than 200,000 participants are participating in the event, in order to enhance community participation in the field of science and technology and the dissemination of a culture of science, technology and innovation.

Egyptian archaeologist Zahi Hawass gave a lecture on Egyptian antiquities, saying that the tomb of Tutankhamun is one of the greatest archaeological discoveries and denied the presence of the so-called “curse of Tutankhamun” or “the curse of the Pharaohs”.

He explained further that ventilation is done for each newly discovered tomb to get rid of insects and germs that have been in the tombs for thousands of years. The lecture also dealt with discoveries found inside the Great Pyramid.