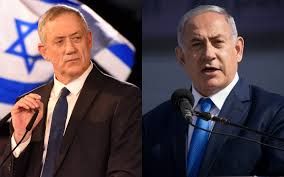 Israel was preparing on Sunday for unprecedented repeat parliamentary elections on Monday, for the third time in less than a year.

Almost 6.5 million eligible voters could cast their ballots in 10,631 ballots across the nation on Monday, according to the Central Elections Committee’s figures.

Some 14 special ballots will be established for the use of hundreds of Israelis who are under mandatory self-quarantine for fear they might have been infected with COVID-19. The quarantined voters could cast their votes wearing disposable masks and gloves in ballots that will be placed in tents.

Prime Minister Benjamin Netanyahu’s right-wing Likud party and Benny Gantz’s centrist Blue and White party are in a tight race, seeking to become the largest party in order to be tasked with forming the next government.

However, polls in Israel’s three main TV news channels show that the two parties are expected to get about 33 seats each, with some polls suggesting the Likud might get one or two extra seats.

Both candidates do not have enough votes to form a majority coalition in Israel’s 120-seat parliament, according to the polls.

The election is widely perceived as a referendum on Netanyahu, Israel’s longest-serving prime minister whose corruption trial on three separate criminal cases has been scheduled to be opened two weeks after the vote.

Gantz has already vowed he will not sit in a coalition with Netanyahu and urged him to resign.

US to support Egypt’s economic reforms: Deputy Secretary of Treasury