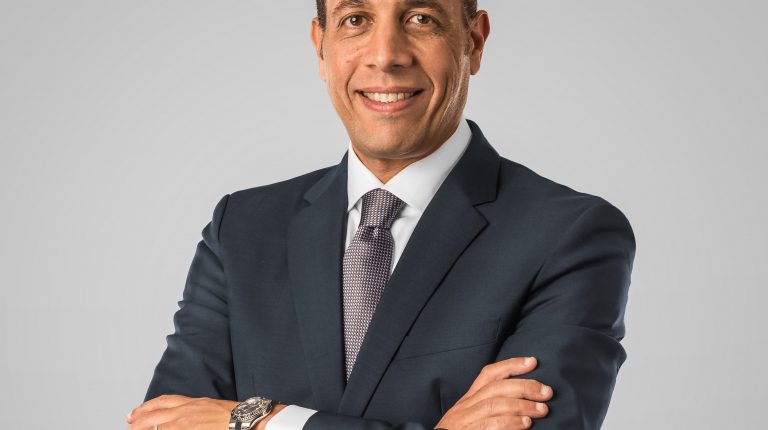 Artificial intelligence (AI) has captured the imagination and attention of people globally. But in the business world, the rate of adoption of AI has lagged behind the level of interest through 2019. Even though we hear that most business leaders believe AI provides a competitive advantage, up until recently, some industry watchers have pegged enterprise adoption at less than 20%.

But as we enter 2020, we’re spotting an uptick, not only in interest but in AI adoption. And that uptick is reaffirmed by a recent global survey commissioned by IBM. The survey, “From Roadblock to Scale: The Global Sprint Towards AI”, polled more than 4,500 technology decision makers. We wanted to gauge the current and future states of AI deployment to better understand the landscape and the challenges. As you’ll see, it’s about to change dramatically. 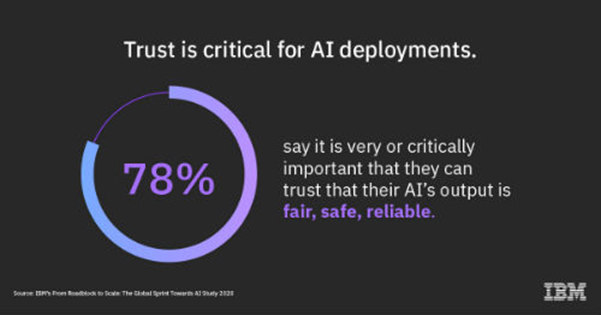 AI adoption on the rise

Results from the Roadblocks to Scale survey indicate that while there is still work to be done, advances in data discovery and management, skills training, and AI explainability are driving the rate of AI adoption faster than many predicted.

For example, 45% of the respondents from large companies (1,000+ employees) said they have adopted AI, while 29% of small and medium sized businesses (under 1,000 employees) responded they have adopted the technology. These numbers are significantly higher than some industry watchers have estimated to date.

Enterprises that have adopted data safeguards and have earned reputations for trustworthy behaviour will have a major competitive advantage in the era of data-driven commerce. Our study indicates that Torchbearers outperform their industry peers in revenue growth and profitability by 165%.

The AI journey streams across the business world

Based on our interactions and the results of this study, we expect to see organisations not only adopt AI but scale it across their enterprises by building/developing their own AI or putting ready-made AI applications to work. For example, according to the survey, 40% of respondents currently deploying AI said they are developing proof-of-concepts for specific AI-based or AI-assisted projects, and 40% are using pre-built AI applications, such as chatbots and virtual agents. 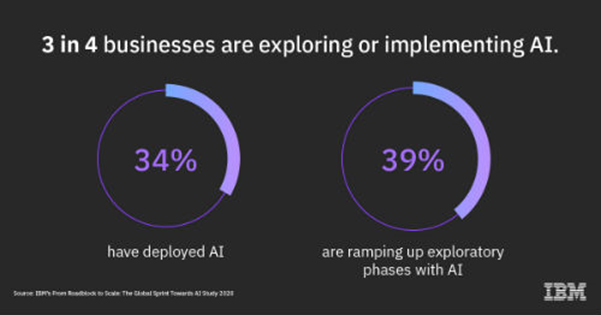 I see the excitement building with clients every day. Consider just a couple of recent examples globally. Legal software developer LegalMation has leveraged IBM Watson and our natural language processing technology to help attorneys automate some of the most mundane litigation tasks. The written discovery attorneys spent hours gruelling over can now be done in a few minutes.

Wunderman Thompson Data, the global digital agency, uses Watson Studio and Watson Machine Learning to access, analyse and run models on terabytes of data stored across its hybrid multicloud environment. As part of its work with Watson Machine Learning, Wunderman is also using IBM AutoAI to automate models to analyse literally tens of thousands of features from across the company’s datasets.

When I look at insights from the report, which was conducted by the firm Morning Consult, and think about my interactions with clients, the roadblocks to AI adoption have been a prime concern. They’re the reason we’ve worked to lower the barriers of entry and make AI more accessible to businesses.

It’s why we launched the Data Science Elite Team in 2018, a global group of experienced technical professionals who help companies solve real problems with AI. It’s what drove us to introduce innovations like Watson OpenScale, to help mitigate bias in AI models; Watson AutoAI, which literally uses AI to build AI models; and it’s what led us to create the first-of-its-kind container-based data analytics platform, Cloud Pak for Data, that lets people run Watson on any cloud. We’ve also, taken skills training and support to whole new levels, with robust data science work with several open standards bodies, such as The Open Group and The Linux Foundation.

The year 2019 was productive for AI, but 2020 is shaping up to bring an exciting new level of commitment and thrilling outcomes for all involved.