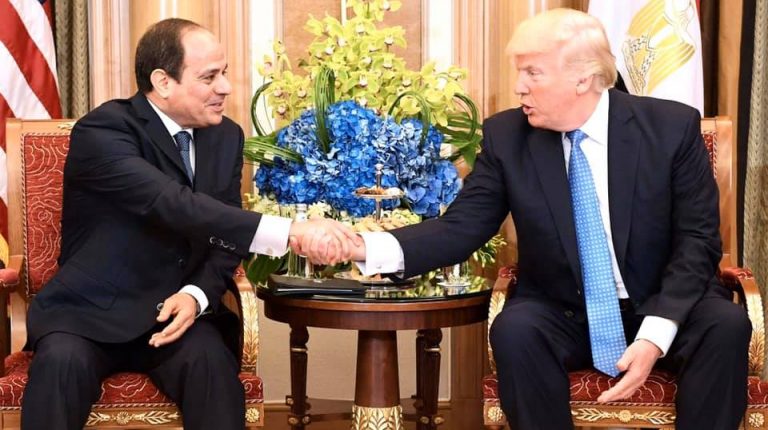 President Abdel Fattah Al-Sisi had a phone conversation with US President Donald Trump on Tuesday over the latest updates of the Grand Ethiopian Renaissance Dam (GERD) talks. During the conversation, Al-Sisi praised Trump for the US mediation and efforts to reach an agreement between Egypt, Ethiopia, and Sudan over the issue.

The conversation comes amid tensions between Egypt and Ethiopia over the filling ad operation of the massive hydroelectric dam. US is acting as a mediator, and host of the latest negotiations between the GERD parties in presence of the World Bank.

During the first meeting, Gakosso delivered a message from the Congolese president to Al-Sisi regarding the Libyan issue.

Egypt’s Minister of Foreign Affairs Sameh Shoukry and Congolese ambassador to Egypt Raphael Malonga were present at the meeting.

According to a statement, Al-Sisi hailed the level of cooperation between Egypt and Congo, expressing the country’s keenness in supporting bilateral cooperation in all fields, particularly in commercial exchange, investment, upgrading infrastructure, and capacity building.

For his part, Gakosso handed Al-Sisi a letter from Congolese President Denis Sassou Nguesso. The letter dealt with the latest updates of the Libyan issue and its impacts on regional and international security.

The two countries agree on a way to solve for the Libyan crisis, based on the political solution in accordance with the Berlin course, and the rejection of any foreign interference in Libyan territories.

The meeting addressed bilateral relations between Cairo and Manama and the role of both countries in maintaining Arab national security.