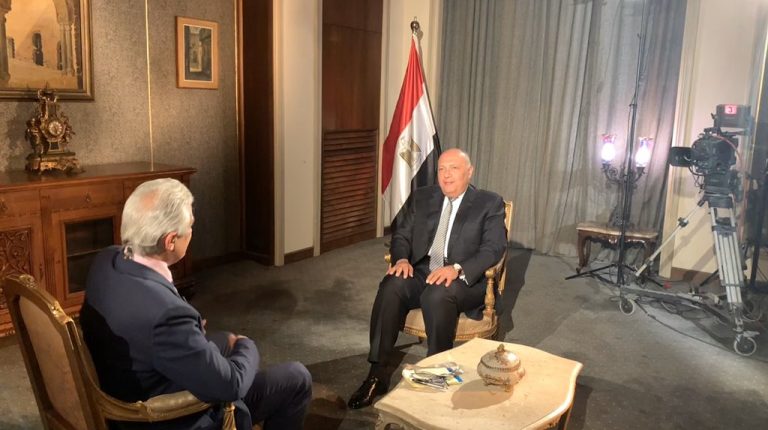 Egyptian Foreign Minister Sameh Shoukry said on Monday that owning the Grand Ethiopian Renaissance Dam (GERD) does not give Ethiopia the right to control the Nile, a few days after Ethiopia missed the last meeting on the dam which was supposed to witness a final agreement on the issue.

During an interview with the national TV, he descried the recent Ethiopian statements regarding filling the GERD as politically and legally unacceptable as well as surprising, noting that Egypt hoped to reach an agreement in order to consolidate relations with Ethiopia.

Ethiopia had announced that it would continue to build the dam and fill its reservoir, regardless of the interests of the other countries, indicating the failure of the American mediation, which aimed to reach an agreement between Ethiopia, Egypt, and Sudan.

Shoukry asserted that Addis Ababa should acknowledge that the Nile is a river that passes through several countries, describing the Nile as the “lifeblood of Egypt.”

Commenting on the last Ethiopian statement, Shoukry explained that Ethiopia signed this agreement and therefore it is legally bound. “Ethiopia’s ownership of the dam does not give it the right to violate legal accords signed willingly, nor will it allow Ethiopia to control the lifeline,” he added.

A final deal was expected to be signed by Egypt, Ethiopia, and Sudan in February, but Ethiopia did not participate in the final round of talks. Despite reaching other deadlock, the United States said it would remain engaged in talks with the three countries to sign a final agreement.

Egypt said the last round of negotiations was to formulate minor technical points that had been negotiated already over the past four months, and were approved by the Ethiopian side.