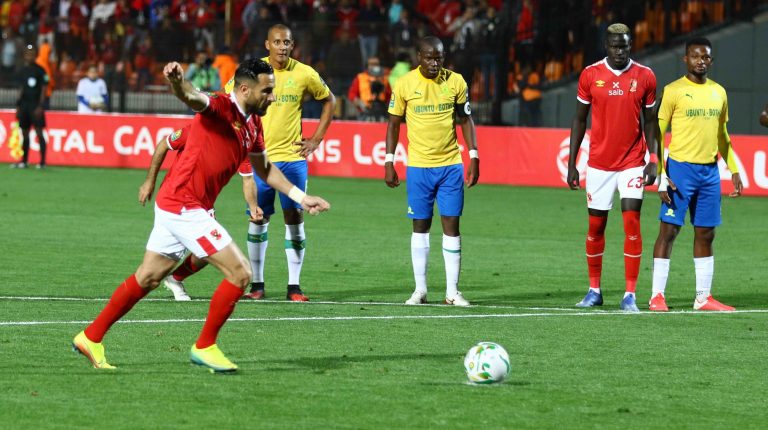 Al Ahly holds main training session on Thursday in South African capital Pretoria, in preparation for their upcoming clash against Mamelodi Sundowns on Saturday in the second leg of the CAF Champions League quarter-finals.

Cairo giants face a date with destiny in South Africa, knowing their opponents will do their best as anything less than a comprehensive victory over Al Ahly will see them suffer an exit from the tournament.

Al Ahly’s Swiss coach Rene Weiler will target another win or draw in the Saturday game to ensure their qualification to the semi-finals, as the club aim to regain the prestigious title for the first time since 2013, and the ninth in history, which will also bring them back to the FIFA Club World Cup.

The coach will hold a meeting with his assistants before the training to agree on some technical issues, after he re-watched the first leg game and identified strengths and weaknesses of the opponents.

Meanwhile, Al Ahly’s Tunisian left-back Ali Maaloul will undergo a medical test on Thursday to assess his ability to play the next match. The player missed the past training sessions as he suffered front muscle strain after the first leg against Sundowns in Cairo, in which he scored the two winning goals.

Zamalek will hold its final training session on Thursday ahead their decisive clash against Espérance Sportive de Tunis on Friday in the second leg of the CAF Champions League quarter-finals in Rades Stadium in Tunisia.

Zamalek officials asked the players to stay safe in their residence and playground after Tunisia reported its first COVID-19 case recently.

The Tunisian security authorities excluded postponing the game, stressing that the state is taking all measures to fight the virus. They also asked Zamalek players and technical staff to wear face masks to stay safe.

The team’s supervisor, Amir Mortada Mansour, said Zamalek players are used to play under stress, adding that he trusts the players to qualify to semi-finals.

The technical staff decided to keep striker Mostafa Mohamed in the squad although he may suffer fatigue due to the team’s recent busy schedule. Meanwhile, Zamalek’s left-back Abdallah Gomaa will miss the next game due to his injury.

WhoScored.com, the international website specialised in football statistics, has named Liverpool’s Egyptian star Mohamed Salah in its team of the month (February) in the English Premier League.

Salah played all his team’s league matches in February, to be the only Liverpool player to make WhoScored’s best squad last month, while Manchester United dominated the Best XI with four players.

The Egyptian Football Association’s (EFA) normalisation committee, led by Amr El-Ganaini, will hold a press conference on Thursday at the EFA headquarters to announce applying the VAR technology in Egyptian stadiums.

The EFA has contracted with Hawk-Eye Innovations, provider of the VAR for Spanish La Liga in the 2019-20 season, to provide Egypt with required VAR equipment, mainly 10 headsets.

A source in the EFA said each game requires seven VAR headsets; four for on-field referees and three for video assistant referees. Therefore, the EFA will hold no more than four games per day in the second round of the Egyptian Premier League.

The Egyptian Football Association’s (EFA) normalisation committee, led by Amr El-Ganaini, has agreed to participate in the FIFA 2020 eWorld Cup, to be held in the Danish capital Copenhagen on 22-24 March.

The EFA will organise qualifiers to choose who will represent Egypt in the championship.

The FIFA eWorld Cup, formerly known as the FIFA Interactive World Cup (FIWC), is an eSports tournament held by FIFA and its presenting partner EA Sports. Each tournament has players competing in games of the latest incarnation of the FIFA video game series.