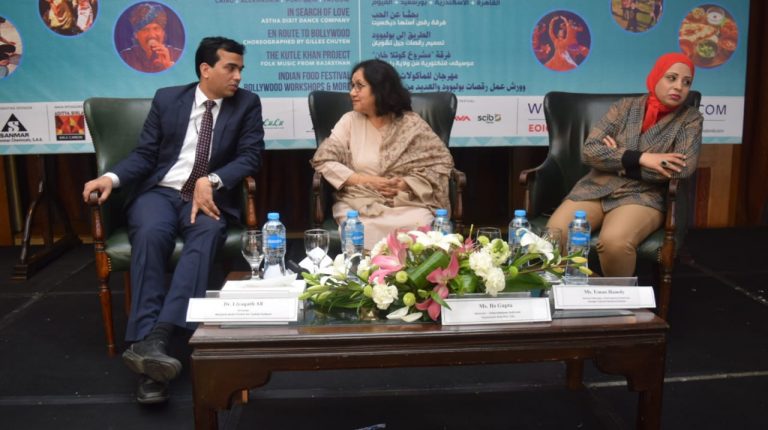 Although COVID-19 appears to justify widespread fear, the cultural festival, India By the Nile, started on Monday, running for nine days until 10 March. The festival also expanded to Fayoum governorate for the first time, in addition to Cairo, Alexandria, and Port Said.

The festival allows Egyptians to visit India without leaving their homeland, discovering India’s secrets of arts, finding inner peace and harmony, as well as testing the spicy yet delicious food of Indian cuisine.

The country’s biggest cultural festival India By the Nile, eighth chapter started on Monday, running for nine days until 10 March. The festival runs in Fayoum Governorate for the first time, in addition to Cairo, Alexandria and Port Said.

In its eighth edition, India By the Nile will bring to Port Said a day of exciting activities, India Day, that will let everyone discover the magic of India on 5 March.

The day will include exclusive performances and workshops of yoga as well as music and dance shows, engaging families with a carefully curated programme appealing across different age groups.

Ambassador of India to Egypt Rahul Kulshreshth said, “As India by the Nile enters its eighth year, we look back with gratitude at the warmth and affection with which our Egyptian friends have received this festival in the past. It is indeed due to their love for Indian culture that the festival is billed as one of the biggest foreign cultural festivals in Egypt.”

“Encouraged by the heartening response, we are proud to present the 8th edition of India By the Nile and, as before, to bring to you the vibrant, colourful, and diverse facets of Indian culture in celebration of the historical and civilisational bonds between our people,” added Kulshreshth.

He explained that every year the festival tries to present a part of India which remains previously uncovered, in order to familiarise and share with Egyptians the incredible diversity which India gracefully holds within itself.

Since 2013, the festival has been bringing different people together every year for musical performances, theatre plays, yoga, and food.

Organised by the embassy of India in Cairo, and the Maulana Azad Centre for Indian Culture, in partnership with the Egyptian ministries of culture and tourism, the Cairo Opera House, and Teamwork Arts, a pioneering entertainment company in India, this year’s festival has an eclectic programme with a variety of shows, including three dancing and musical performances.

Kathak, a classical dance form from India which tells stories through exquisite choreography and facial expressions, will be showcased by the charismatic Astha Dixit and her ensemble who will bring to life the timeless poetry of Sufi poets.

“En route to Bollywood” dance show will present the electrifying music and dance of Bollywood films through a series of spectacular dance sequences across multiple cities.

This edition’s dancing workshops will be presented by the gifted Bollywood choreographer Gilles Chuyen. Providing Bollywood dancing experience to a spontaneous audience of all ages, the workshops are to be held in Cairo, Alexander, and Port Said.

As for Indian cuisine, the 5-star Intercontinental Cairo Semiramis will host the Food Fiesta from 4 to 8 March. Acclaimed Indian Chef Vikram Udaygiri will curate a delectable gastronomical journey in Indian fine dining from the country’s vast cuisine repertoire.