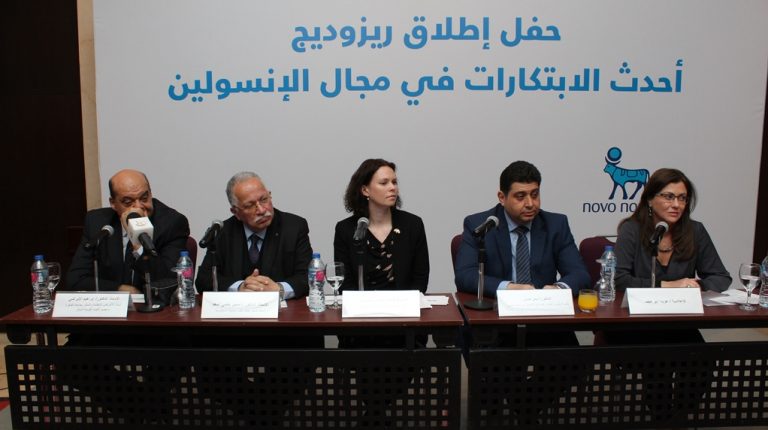 Ryzodeg was approved by the US Food and Drug Administration (FDA) in 2015 and the European Medicines Agency (EMA) in 2013. It is now commercially available in 31 countries. The new drug is a combination of insulin degludec and insulin aspart (IDegAsp) in one pen for the treatment of people with type 2 diabetes.

Clinical effects of the new drug were presented at a press conference, in presence of Camilla Rasmussen, Charge d’Affairs of the embassy of Denmark in Egypt, and Ayman Hassan, VP and General Manager of Novo Nordisk Egypt.

During the press conference, Professor of Internal Medicine and Diabetes at Alexandria University Samir Helmy said, “Ryzodeg has unique clinical features, as it is a combination of ultra-long acting basal Insulin degludec (Tresiba) and fast acting insulin aspart (Novo Rapid) in one pen for the treatment of people with type 2 diabetes.”

He added that the burden of diabetes is not limited to acute symptoms associated with hyperglycemia, as the complications are more life-threatening and include Cardiovascular diseases, diabetic kidney disease, diabetic foot, retinopathy and others. Patients can suffer from these chronic complications for the rest of their lives if blood sugar levels are not properly managed

Adherence to insulin use is one of the key factors of proper diabetes management. Simplicity is one of the most important factors that doctors need to take into consideration when they are prescribing insulin to allow adherence and proper control. Ryzodeg is one of the simplest insulin options for treatment of type 2 diabetes

More than 8.9 million Egyptians are suffering from diabetes, representing 15.2% of the total adult population. Egypt ranks ninth highest country in the world in terms of diabetes prevalence rates.

Ibrahim Al Ibrashy, Professor of Internal Medicine and Diabetes, Cairo University and Member of the National Committee for Diabetes and Endocrinology said that the clinical studies show the efficacy of Ryzodeg in lowering rates of nocturnal symptomatic hypoglycemic episodes by 45% compared to conventional insulin regimens. Eventually, Ryzodeg is one of the safest insulin types for people with type 2 diabetes.

For his part, Ayman Hassan, General Manager of Novo Nordisk Egypt, underlined the company’s efforts to introduce the highest level of healthcare to Egyptian diabetics, in order to alleviate burdens and health complications imposed by this chronic disease, while changing lives of people with diabetes.

He affirmed the company’s commitment to build capacity and skills of Egyptian doctors and healthcare providers, in addition to establishing of specialised diabetes healthcare centers in cooperation with the Ministry of Health and the National Health Insurance Authority.