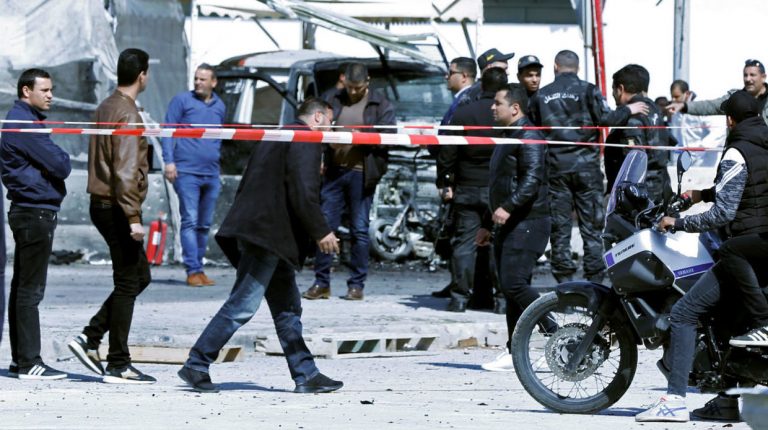 Two suicide bombers used large amounts of explosives in a bombing near the US Embassy in Tunis, a Tunisian spokesperson for the judiciary’s counter-terrorism office Sofiane Selliti said on Saturday.

He explained that the attackers’ motorcycle was also “packed with explosives,” but authorities have yet to determine the composition of the explosives used on the bombing, according to Tunis Afrique Presse.

The attack remarks the fourth anniversary of the Battle of Ben Guerdane, on Tunisian borders with Libya. In 2016, the border city of Ben Guerdane, witnessed an attempt by Islamic state (IS) forces to seize the city, but were repulsed by the Tunisian military.

The IS, which suffered one of its greatest defeats in Tunisia, used the anniversary to send multiple messages to Tunisia and its allies, especially the United States, committing suicide bombings at the American embassy’s security cordon.

The two terrorists, Salim Al-Zanadi and Habib Lakah, who lived in a neighbourhood not far from the embassy’s location, have served prison sentences on charges of belonging to a terrorist organisation. One of them had just recently left prison.

The Tunisian Ministry of the Interior announced the killing of terrorists and the injury of five security personnel, in addition to a civilian, with injuries of varying severity.

However, one of the five officers later passed away, according to Interior Ministry spokesperson Khaled Lahyouni. He insisted that the deadly attack targeted the officers on patrol and not the US embassy.

The US Assistant Secretary of State for Political-Military Affairs, Clarke Cooper, said combating terrorism is “a long-term proposition, there’s always going to be a threat wherever you are, globally.”

The attack has raised strong international condemnation, in addition to expressing sincere condolences and sympathy to the family and relatives of the victim due to this heinous crime.

The UN expressed on Saturday its strong condemnation of the terrorist attack that targeted a security patrol near the embassy. It also voiced its solidarity with the Tunisian people and authorities, asserting its readiness to support the government in facing challenges, including combating terrorism.

Late on Friday, Egypt’s Al-Azhar, the world’s leading Sunni Islamic institution, condemned the suicide bombing that targeted security forces near the American embassy in the Tunisian capital, extending its sincere condolences to the Tunisian people and to the relatives of the deceased.