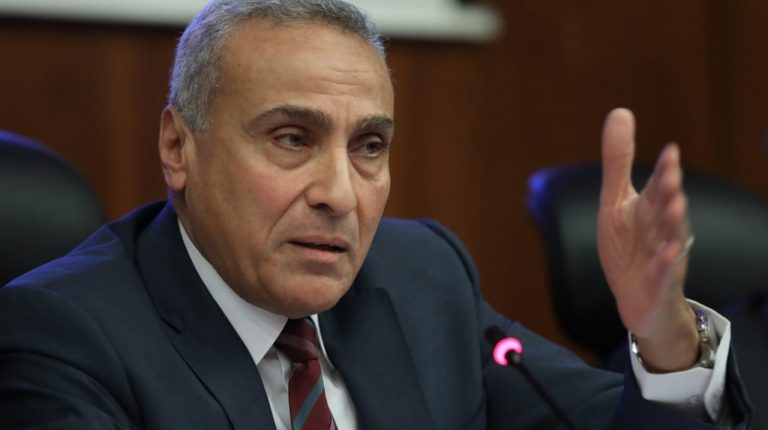 Deputy Governor of the Central Bank of Egypt (CBE) Gamal Negm said job creation is an essential part of the work of central banks, which explains why the CBE launched several initiatives to support economic sectors that require high labour force, such as industry, tourism, real estate, and small and medium enterprises (SMEs).

Daily News Egypt, among other media outlets, interviewed Negm last Wednesday, on the sidelines of the CBE’s and the Nile University’s celebration of the NilePreneurs initiative’s first anniversary.

When asked about the extent in which Egyptian banks and economy were affected by the COVID-19 outbreak, Negm responded that the CBE took the initiative to support affected sectors. He mentioned that the bank launched initiatives to increase the capacity of the Egyptian economy to handle any blow that may arise from the COVID-19 crisis.

Negm explained that the liquidity in the Egyptian market is very large, and will help protect the Egyptian economy from any crises.

The funds allocated for the CBE’s initiatives for housing, industry, and SMEs amount to about EGP 600bn, and mainly targets segments that are severely affected by global crises.

Under the industry support initiative launched by the CBE in December 2019, which allocated over EGP 100bn, Negm said banks have pumped about EGP 2.8bn to 115 customers until 20 February. This figure is expected to increase.

He explained that these funds were used to finance machinery, equipment, and production lines for 13 customers, and to finance working capital for the other 102 customers.

With regard to the middle-income housing initiative launched by CBE before the end of last year, Negm said it’s still in its beginning stage, and that funding is still coming in at a low rate due to the low number of housing units that meet the initiative’s criteria.

Moreover, the CBE launched a mortgage finance initiative to offer middle-income people a 10% discount on housing units. The initiative was allocated about EGP 50bn.

Negm pointed out that the CBE’s earlier mortgage finance initiative for low-income people had gone through the same situation, where at the beginning financing was minimal and didn’t exceed EGP 40m. However, after a while, the initiative started to witness larger financing exceeding EGP 800m per month.

However, there are some problems with the real estate developers, seeing that they have been delivering incomplete units. Negm stressed that the CBE will not waive or negotiate the terms of the initiative which require that the housing unit be fully finished so that the bank can finance it.

“Real estate developers do not usually provide fully finished housing units. Instead, they provide semi-finished units, which is contrary to the conditions of the initiative, as the real estate finance law requires the completion of the housing unit,” Negm said.

He pointed out that the CBE held several meetings with several real estate development companies to discuss the eligibility of their housing units to the initiative. He added that these units will be delivered in successive batches, starting with 50,000 units, then 100,000, and so on.

He pointed out that real estate finance companies participate in the initiative in cooperation with banks, through the Egyptian Association for Real Estate Finance, which is the official body that addresses such companies.

With regard to the SMEs initiative launched by the CBE in December 2016, where banks supply 20% of their total loan portfolio to these projects, Negm said many banks have already agreed to the CBE’s conditions.

He explained that the initiative was extended for various activities other than commercial, pointing out that the CBE supported the Credit Guarantee Company to encourage banks to finance SMEs.

According to Negm, the value of the guarantees provided by the company has increased from about EGP 3bn to about EGP 18bn.

When asked about the latest updates of the non-performing debt settlement initiative for factories and companies whose debts amount to EGP 10m, Negm said the CBE held meetings with 266 defaulting customers until 27 February to settle their debts within the framework of the initiative.

He explained that the combined debts of these customers amount to about EGP 63.6bn, pointing out that these defaulters will be partially exempted from the original debt, as well as interests amounting to EGP 17.4bn.

So far, meetings were held with 155 defaulting clients with total debts amounting to EGP 19.4bn, of which EGP 10.9bn of the main and marginal interests were waived. Moreover, Negm pointed that the judicial procedures against 97 defaulters were suspended. Banks are also considering providing funding for 88 clients.

He added that the CBE also held meetings with 71 defaulting clients with total debts amounting to EGP 44.2bn, of which about EGP 6.5bn of the original debt and marginal interest will be waived.

Banks, between 2 December to 13 February, made settlements with 246 defaulting clients at a value of EGP 704m, EGP 110m of which were paid in cash, and EGP 37m in original debt were waived, in addition to waiving EGP 376m of marginal interest. These debts were settled directly between banks and their customers, which are different from those settled with the help of the CBE.

In regard to drafting the new banking law, Negm said that parliament’s economic committee is close to finishing the law’s discussion in preparation for general vote.

He explained that the law was praised by members of the economic committee, applauding the committee’s great efforts in discussing and revising the law.

The CBE used its international expertise in drafting the law, to keep pace with the latest global developments in banking. There has been no fundamental change in the articles of the law that were approved previously by the cabinet.

According to Negm, about 70% of the banks operating in the Egyptian market are in compliance with the minimum capital requirements stipulated in the new banking draft law, which are EGP 5bn for Egyptian banks and EGP 150m for foreign banks.

However, some members of parliament’s economic committee have expressed their concerns over possible mergers and acquisitions within the Egyptian banking sector after passing the law. They were reassured that most banks are able to comply with the minimum capital requirement, by transferring retained earnings and reserves to increase the capital. There will also be a transitional period to reconcile their conditions with the government for up to three years.

Regarding the fate of offering a share of Banque du Caire in the stock market, Negm revealed that preparations are underway to offer a share ranging from 20% to 30% of the bank on the Egyptian Exchange. He added that determining the price and timing of the offering is the responsibility of the concerned committee and consulting offices. He added that COVID-19 crisis will not affect the attractiveness of the bank’s offering. It is expected that the offering will attract local and international investors.

In the same context, Negm pointed out that there are many offers to buy the United Bank, explaining that CBE has the right to approve or refuse entering of new banks in the market based on the added value these banks would bring to the market.

He pointed out that the First Abu Dhabi Bank is currently conducting a due diligence study on Bank Audi, pointing out that offering the bank for sale will not affect the sale of the United Bank or the offering of Banque du Caire.

He added that the Arab Investment Bank is seeking to increase its capital by selling some of its shares, stressing that it has yet to receive offers from Al Mashreq Bank or others as reported earlier.

Negm noted that Bank Audi’s merger deal with the National Bank of Greece (NBG) may have failed, noting that the CBE, so far, has not received any new offers to take over NBG.