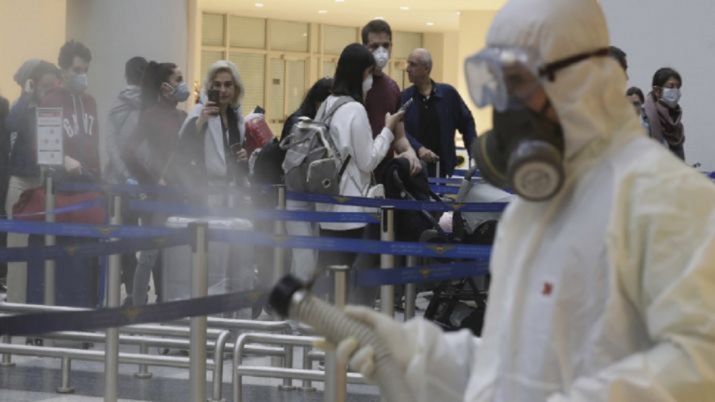 Iran is working hard to combat the rapid outbreak of the novel coronavirus disease (Covid-19), as the global number of confirmed cases has surpassed 100,000 on Friday. The new virus, which has spread to around 80 countries has claimed 3,110 deaths since its emergence in China.

Iran health ministry spokesman Kianush Jahanpur announced on Friday that the number of cases recorded in the country rose by 1,234 in just few days, bringing the total number to 4,747.

About 124 cases have resulted in death in Iran, the health ministry announced Friday. The deaths included several Iranian government officials, MPs, and politicians.

Iran now comes behind China and South Korea in terms of the disease’s spread, which is believed to have spread all across the Islamic Republic.

Handling the outbreak, Iran announced last week to extend its closure of schools and universities for additional two weeks. The country has also limited travel between major cities and urged citizens to reduce their use of paper banknotes.

This comes at a crux of severe political tensions between the population and the government, and despite the government’s declaration of taking the necessary steps to take care of its citizens, a lack of confidence has been further widening amid the recent epidemic.

Now, the Iranian government came under criticism over its dealing of the crisis as well as its lack of transparency over the confirmed number of Covid-19 cases and deaths.

To combat the spread of the disease in crowded jails, Iran also temporarily released 54,000 inmates. It cancelled Friday prayers in the capital Tehran and 22 other provinces.

Covid-19 cases with a travel history to Iran have also been reported in Afghanistan, Canada, Lebanon, Pakistan, Kuwait, Bahrain, Iraq, Oman, Qatar and the United Arab Emirates, the WHO said.

Another challenge Iran currently faces regarding the spread of the virus is the shrines that are always crowded with Shia visitors. Despite warning against touching the shrines, videos have been circulating social media recently showing some people touching the doors and burial mound inside Fatima Masumeh’s Shrine in Qom.

This has raised many concerns and inquiries as to why the government has not halted travel to these sites, if its so concerned over the virus’s spread.

Last week, Iranian President Hassan Rouhani said the enemies of Iran are using the spread of Covid-19 against the Iranian people, accusing them of releasing “false statics and statements,” over the real situation.

Rouhani added that if the US is honest about its intention in helping Tehran in dealing with the outbreak, it has to “at least lift its ban on medicine.”

Earlier, the United States expressed its concern that Iran might not announce the full and accurate details of the situation on the ground, urging Tehran to cooperate completely and transparently with international organisations.

The US said that it will exclude food, medicine, and medical devices from its economic sanctions on Iran, offering to help the Iranian people in their crisis.

On the other hand, the WHO sent a team of experts to Iran “to work with health authorities and other stakeholders to review ongoing readiness and response efforts, visit designated health facilities, laboratories and points of entry, and provide technical guidance.

“Doctors and nurses have concerns that they do not necessarily have enough equipment, supplies, ventilators, respirators, oxygen,” the Executive director of WHO Health Emergencies Programme Michael Ryan said on Wednesday.

“It is not an easy situation,” he said, adding that “the disease is now well-established.”

Fears have been on the rise over the scale of outbreak in Iran, as well as in Italy and South Korea, with the rapid increase of detected cases.

Several countries including the UAE, US, Bahrain, and Saudi Arabia temporarily suspend the travel of its citizens to countries that have cases of coronavirus, including Iran, to prevent the transition of the virus.

Saudi Arabia also decided to suspend Umrah pilgrimage temporarily for foreigners, residents, and Saudi citizens over fears of the spread of Covid-19 to the holy cities of Mecca and Medina.

Earlier, Saudi Arabia announced its first confirmed case of coronavirus in a Saudi national returning from Iran via Bahrain.

About 2.5 million pilgrims visited Saudi Arabia for Hajj last year, according to the kingdom’s General Authority for Statistics. Thousands of Iranian pilgrims visit the holy two cities every year.

The US, over the years, has imposed a wide range of economic sanctions to punish Tehran.

In 2016, international sanctions were lifted after the US and Iran signed the Joint Comprehensive Plan of Action over Iran’s nuclear programme. However, the US pulled out from the agreement in November 2018, redoubling tougher sanctions on Iran. Rights groups say that the price of these sanctions is being paid by the Iranian people.

“Though the US government has built exemptions for humanitarian imports into its sanction regime, broad US sanctions against Iranian banks, coupled with aggressive rhetoric from US officials, have drastically constrained Iran’s ability to finance such humanitarian imports,” the Human Rights Watch (HRW) said in an October 2019 report.

“The consequences of redoubled US sanctions, whether intentional or not, pose a serious threat to Iranians’ right to health and access to essential medicines” the HRW added.

The HRW found that “current economic sanctions, despite the humanitarian exemptions, are causing unnecessary suffering to Iranian citizens afflicted with a range of diseases and medical conditions.”

“Some of the worst-affected are Iranians with rare diseases and/or conditions that require specialised treatment who are unable to acquire previously available medicines or supplies. This includes people with leukaemia, epidermolysis bullosa, or epilepsy, and individuals with chronic eye injuries from exposure to chemical weapons during the Iran-Iraq war,” the HRW said.