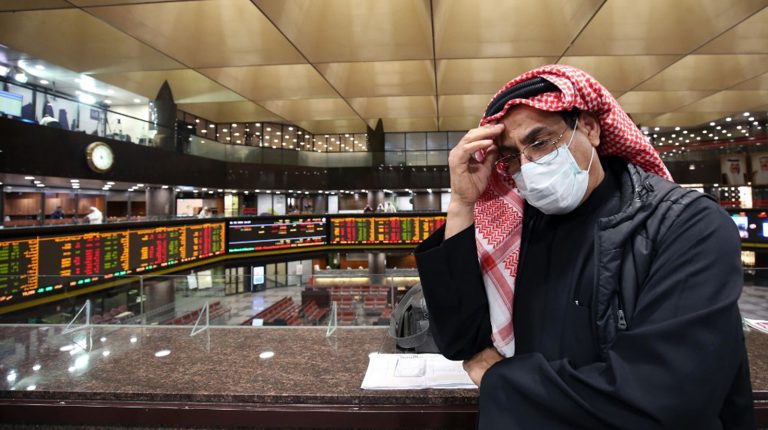 The stock markets bloodbath triggered the first-ever forced trading halt in the US and similar measures in Egypt, Europe, Asia, and Gulf Cooperation Council (GCC).

The Monday slaughter spared no one, as the Dow Jones Industrial Average plummeted at the opening bell, plunging by more than 1,500 points. The S&P 500 fell about 6%, European stocks down more than 6%, and the Egyptian Exchange saw severe decline by 7.31% to 10,983 points. Similarly, stock markets in the energy-rich Gulf states nosedived at the start of trading, as Saudi Arabia stock market fell by over 9%, Kuwait’s Premier index tumbled 9.5%, Dubai Financial Market dropped 9%, and Abu Dhabi Securities Exchange shed 7.1%.

The fight over crude oil production has heightened pressure on a global economy, already suffering the effects of the coronavirus epidemic.

The catastrophic situation was anticipated by several traders, after oil prices cratered overnight by 30%, the biggest daily loss since the Gulf War in 1991. The price plummets followed Saudi Arabia decision to raise production to more than 10m barrels per day, after talks in the oil cartel OPEC failed. In the same time, the COVID-19 outbreak is currently causing the global market to hold excess oil supply.

As the world’s oil-producing countries’ failure to strike a deal in Vienna last week, the stalemate continued over the weekend, with Saudi Arabia and Russia reportedly planning to ramp up production on their terms after the current deal expires at the end of the month.

Egypt’s former petroleum minister Osama Kamal told Daily News Egypt that Saudi Arabia will increase the oversupply of crude oil in global markets, causing the price of a barrel to drop from the current $34.9 a barrel.

Consequently, investors and traders took shelter in safe havens, as a result, gold hiked to a seven-year high, while US 10-year yield treasury bills reached an all-time low of 0.3% by early morning.

The global wave of sell-off comes as fears mount that the viral outbreak will further disrupt supply chains, travel, and production around the world.

Time to ease? IMF says so

In a blog post published Monday, IMF chief economist Gita Gopinath said the human costs of the coronavirus epidemic have surged “at an alarming rate.” As a result, she recommended that governments should consider measures like cash transfers, wage subsidies or tax relief, while central banks should be prepared to provide liquidity to banks and companies, as the epidemic disrupts supply chains and consumer demand around the world.

“The goal is to prevent a temporary crisis from permanently harming people and firms through job losses and bankruptcies,” Gopinath wrote.

Coronavirus latest statistics show that more than 111,363 cases have been infected by COVID-19 globally, resulting in more than 3,892 deaths. The coronavirus outbreak has disrupted global manufacturing, supply chains, and rattled financial markets.

Moreover, Gopinath called on authorities to realise measures like wage subsidies, paid sick leave or tax relief to assist companies and individuals affected by the spread of the virus.